Manx to the Four! 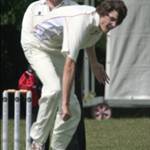 The Isle of Man Under 19 Cricket team sit proudly at the top of Division Two of the ICC European Championships in Belgium.

Two wins in Twenty20 games yesterday mean the Manx have a 100% record with four victories.

They scored a very competitive 158 for 7 against Israel with Max Stokoe hitting 68 and Alex Stokoe 23. Then they dismissed their opponents for 120 to gain victory by 38 runs. Alex Stokoe ended a fine game with 3 for 17 and there were two wickets each for Harry Rothwell, Danny Hawke and Max Stokoe.

In their next fixture against Gibraltar, Alex Stokoe crashed 63 as the Manx reached 134 for 5 after a slow start to the innings. Jack Rowlands scored 22 and Danny Hawke 17. 14 year-old Ramsey leg-spinner Shaun Kelly took 3 for 13 to help bowl out Gibraltar for 76.

Manager Gareth Dawson is not getting carried away but is said to be very pleased with the results so far.However, he is stressing there is still much hard work ahead. The Isle of Man is the lowest ranked of the all the teams competing in Belgium.

The Manx are two points clear of Belgium in the table - today is a rest day, tomorrow the Island meet Germany and on Saturday face the host nation Belgium in a potential decider.