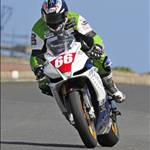 A tribute lap of the TT course for the late Mark Buckley is taking place this lunchtime.

It's due to set off at 1.30pm, slightly later than originally scheduled, due to road repairs taking place on the Mountain section of the course.

The lap has been organised by friends of the popular Scottish rider, who lost his life in an accident at the North West 200 just over two weeks ago.

Mark had been due to ride for the Splitlath Redmond team in this year’s TT.

Today, close friends and family will pay tribute to the 35-year-old with the special ride out.

Mark’s wife Jayne and father Jimmy will follow in the Course Car, and they will be joined on the road by friends, fans and any racing enthusiasts who would like to take part and pay their respects.

Dave Hopkinson says Mark had been very excited about riding his Superbike at this year's TT, and the lap will be a fitting tribute to him.

The ride out will set-off for the lap from Pit Lane at 1.30pm.

Anyone who wants to join in is invited to meet at Pit Lane or at the Grandstand area from around 1pm.