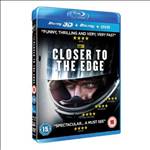 Duke Marketing says sales of TT3D: Closer to the Edge have been overwhelming at the Bike Show in Birmingham this week.

Peter Duke says some stock has been made available to sell despite the official release date being next Monday.

His company has been selling the documentary from its website as well as at the stall in Birmingham.

On Thursday evening, Mr Duke told Jason Roberts there had been a huge demand: