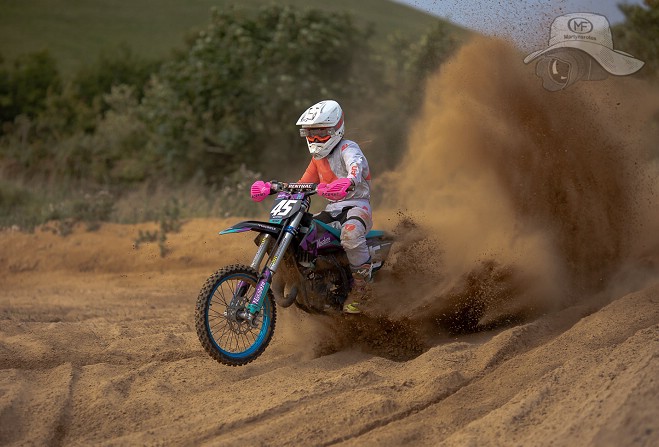 ‘The Switch’ - Round 3 of the Isle of Man School Boy Motocross Championship – 5 September 2021.

With the blessing of RAMSEY MOTOR CYCLE CLUB, The Isle of Man School Boy Motocross club held its first event at West Kimmeragh in Bride.

The 65cc class once again saw Marley Meechan and Toby Lang go at it hammer and fist. Lang drew first blood by taking victories in race one and two with Meechan coming second in both. However, in the final race of the day Lang made a few errors and ended up finishing in 5th leaving Meechan to capitalise taking the race win along with the overall win. Findlay Knight continues to show promise taking third overall with Stanley Dentith taking 4th and Oliver Herdman in 5th. Sadly, the class was missing the protagonist Leo Gray who had to sit out the event due to injury.

In the Autos, Riley Faragher took a clean sweep of wins with Maverick Meechan keeping him honest with three 2nd place finishes. Lucian France is growing in confidence and rounded off the top 3, with Lincoln France in 4th.

Castletown's Jacob Wilson was again in a league of his own literally! With some riders absent meant he was the sole rider in his class but continues to impress for such a young rider and so new to the sport.

Travis Meechan and Ryan Christian resumed the rivalry, but this time Harry Shand wanted a piece of the action! Christian set a hot pace in race 1 with Meechan right on his tale until a dramatic fall in full eyesight of Shand. Race 2 saw Christian quick out the blocks and again both Meechan and Shand chasing him down, but no errors saw Christian take it. Race 3 saw Christian run away with it, with Shand again in 2nd and Meechan dropping way back.
Josh Blackley put in a solid effort all day and Alfie Mathieson-Nelson continues to get closer. Sean Crone Switched back from road to dirt and rode really well. The class too welcomed the impressive Summer Peters, a welcomed female nemesis for Millie Bottomley!

This class once again offered spectacular racing, especially between Beau Brown on his 125cc KTM and Liam Smith on his newly acquired 125cc Husqvarna. Brown has been on blistering form in recent events however Smith has found form on a new machine I was really taking it to Brown. Brown took the win in all 3 races with Smith taking 2nd overall but it’s clear from Smiths form that Browns winning streak may just come to an end sooner rather than later. Ethan Blackley took 3rd overall performing well on the gasser, sadly Luke Saunders hand little to no luck with his new 250f going pop leaving him to borrow a machine.

Ryan Cringle was back to the paddock and more determined than ever following his cross-code success at Andreas and Jurby. Cringle was on impressive from and took wins in all 3 moto’s but was pushed all the way from his brother Jamie Cringle, Jordan Corkill, Gavin Hunt and Grant Thomson Thompson until a monstrous crash ruled him out of proceeding’s. The pace of these boys is really impressive and proves the level of the sport on the Island is really high. Kane Hall was on fine form too and wasn’t far from the sharp end with Grant Skeoch not far behind. Acknowledgement too to Martin Corkish who rallied all week to get Marshals for the event, sorted the marshals on the day and rode well despite a big off.