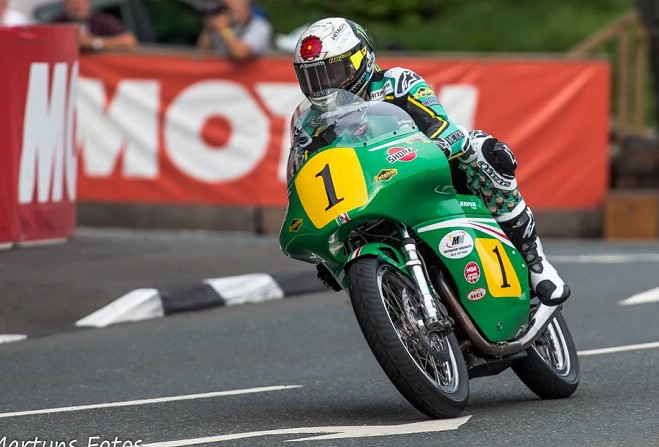 With weather allowing for only one group of racers to practice on Thursday evening, there was just enough time to show the world of motor racing one thing; that John McGuinness is back, and he’s still on top.

Riders eagerly sped off from the Grandstand for the night’s qualifying, after a disappointing afternoon of yet more cancelled practice laps.

Tension amongst racers was palpable as the noise levels rose to the tune of 60 plus revving engines.

And it was an impressive comeback from lap record holder John McGuinness, who quickly proved he hasn’t lost his touch.

Pressure was on McGuinness who was out for the first time since his serious leg injury at the North West 200 in May 2017.

Despite less than perfect conditions McGuinness still hit 127mph through the speed trap at the Grandstand.

And was way ahead by the end of his second lap, fastest with an average speed of 106.585mph.

Another impressive performance was seen from Maria Costello, who was faster than McGuinness through the Sulby speed trap on their second lap.

Of the Classic TT Junior racers, Philip McGuirk was quickest with a lap speed of 95.988mph.

David Lumsden took the top spot in the lightweight class, with 107.563mph, with Darryl Tweed top of the ultra lightweights 103.240mph.

Finally in the MGP Newcomer B Class, Japanese rider Yoshirhiro Kishimoto was first with 98.937mph, followed closely by James Hurd at 98.913mph, and also close behind, Barry Sheehan was third at 98.471mph.

After a heavy rain shower over the west of the Island, the clerk of the course announced it was not safe on the course to send out any superbikes.