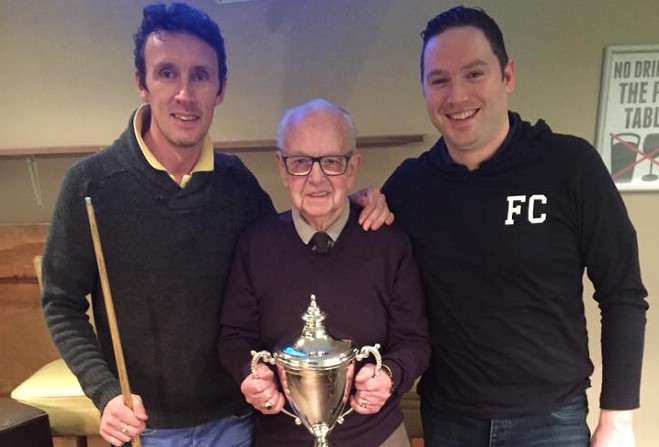 Peter Kirkham (left) had this week's high break, a 61

Snooker - one point in it with one match to play

Are Finch Hill 'Mob' champions elect? Or will St Olaves spoil the party?

Just one point now separates the two sides, with one match left to play of the 2018/19 Macs Builders Merchants snooker league.

The 'Mob' may well have thought they'd be more comfortable heading into the final week of play, but stay in pole position after a strong 4-1 win away at the Douglas Snooker Club 'Hurricanes'.

Peter Kirkham was the individual performer of the week, with a slick 61 clearance in his win against Nigel Kermode.

Peter Crellin and Tom Miller weren't far behind, with breaks of 24 and 22 as they both won, which was followed by a victory for Steve Oates to make it 4-0.

But Chris Dagnall avoided the whitewash for the 'Hurricanes', beating Steve Finnegan in the final frame.

Paul Smith also had a break of 24 in his frame against Miller which gives him a points boost in the break league standings.

St Olaves continued their surge up the table at the back end of the season, though, with a whitewash win away at Peel Legion which included three black-ball games.

There were heavier wins for Sean Corkish and James Kerr, who had breaks of 36 and 25 to complete the 5-0 and keep them right in contention for the final week.

Finch Hill 'Musicians' are still mathematically able to win the league, too, after they won 4-1 in Ballasalla to leave themselves three points off the leaders.

Tony Cubbon was the only victor for Malew 1, with Vinny Dale, James Hynes, Matthew Dodd and John Kennish winning for the 'Musicians' - Kennish producing yet another scoring masterclass with breaks of 40 and 38 in the final frame.

Finch Hill 'Young Guns' are also still mathematically in the mix in fourth place, after they won 4-1 at home to Malew 2, but would need other results to go strongly in their favour to have any hope of climbing.

Darryl Hill had breaks of 29 and 20 in his frame victory, and the other 'Young Guns' wins came from Dollin Mercer, Paul Tangeman and Nick Stephens - David Quayle avoiding the whitewash for them.

There was another 5-0 on the adjacent table, though, as Finch Hill 'Rockets' sent Port St Mary Legion back down south with their tails between their legs.

Marek Kenny, Graham Ashton, John Spellman and 'Rocket' Ron Grogan all won their frames, before Ken Kinrade sealed the drubbing with a 23 break in the last.

At Douglas Snooker Club, the 'Wannabes' needed a good win to give themselves a chance of anything other than the wooden spoon for the season, but a 3-2 victory for the 'Newbys' confirmed their fate.

Jamie Wilson and Zain Abideen had breaks of 33 and 24 for them to win their frames, either side of a 'Wannabes' win for Steve Cowin.

Stephen Harvey drew the scores level, but Pat Maher won the final frame for the 'Newbys' to put them ahead for the third and final time in the fixture.

In the individual standings, James Kerr is now guaranteed to finish player of the season, sitting on 17 wins from 21 played.

Second-placed Tom Miller won't be able to catch him, on 15 from 18, and neither will Chris Dagnall in third on 15 from 21.

John Kennish and Sean Corkish make up the top five, on fourteen wins apiece, from 17 and 20 matches respectively.

Jamie Wilson still holds the highest break of the season with a 72, followed by two breaks from Peter Kirkham, a 68 and the 61 clearance from this week.

James Kerr and John Kennish make up the top five there, with a 57 and 56.

Kennish leads the break league, though, on 46.5 points.