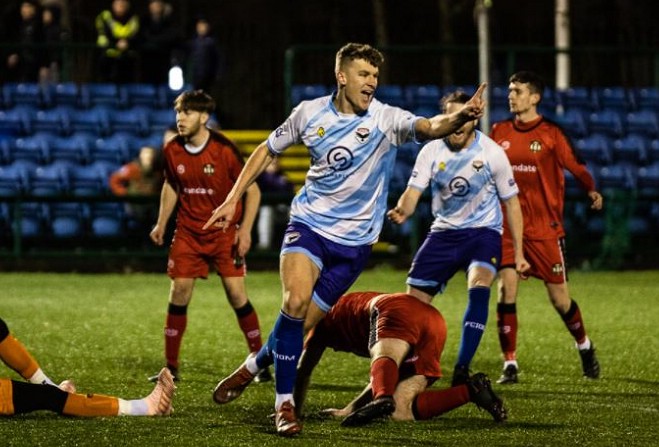 First half blitz from Ravens enough to take three points

Luke Murray scored twice in a first half blitz as FC Isle of Man defeated Alsager Town 4-1 at The Bowl last night (4 December).

The Island side went into the game unbeaten in their last six, whilst Alsager Town were looking to build on back-to-back wins in their last two games.

It was the perfect start for the Ravens with just two minutes gone when Luke Murray poked home a rebound from close range after Alsager failed to clear from a corner.

Murray then got his second just three minutes later, rising up at another corner to beat Alsager goalkeeper Dimeji Willan with a powerful header into the top corner.

Shortly after that, the visitors got their best chance of the first half when FC IOM goalkeeper Dean Kearns was forced into a low diving save to deny a fierce half volley from Ryan Hibbert.

With 25 minutes on the clock, the Manx team made it three when Ste Whitley pounced on a flicked header from teammate Michael Williams on the edge of the area, nicking the ball ahead of Alsager defender Craig Sigley to go through on goal and slot a calm and collected left foot finish into Willan’s bottom right corner.

And a clinical first half from the home side was topped off with a fourth goal when Alex Harrison, unmarked at yet another FC IOM corner, smashed a header into the top corner from around twelve yards.

Despite the first half whirlwind, neither the Ravens nor Alsager Town could find much tempo in the second 45 minutes which largely lacked rhythm and inspiration, and very little in the way of clear cut chances for either side.

The fans in the stadium had to wait until the 84th minute for the most clear opening in the second period, and it fell the way of the visitors.

Alsager’s Joshua Paterson from central midfield took advantage of the Ravens defence going to sleep, sliding a through ball through the back line to the Bullets’ captain Jordan Stafford who, one-on-one with Dean Kearns, made no mistake finishing high into the roof of the net.

Two minutes later FC IOM then found themselves down to 10 men when Alex Maitland brought down Joe Holt on the edge of the penalty area and was shown a straight red for possible denial of a goal scoring opportunity.

The Ravens, however, held out for the three points which keep them inside the NWCFL Div 1 South play-off positions.

Manager, Chris Bass, says whilst he was happy with the three points, he was less impressed with how his side handled the second half:

Meanwhile, scorer of FC IoM's fourth goal of the game, Alex Harrison, made his first start for the team on Saturday night as he continues his return from a lengthy injury absence:

Their next game will be away at Rocester on Saturday, 11 December at 1.45pm

Man of the Match: Luke Murray (FC Isle of Man)