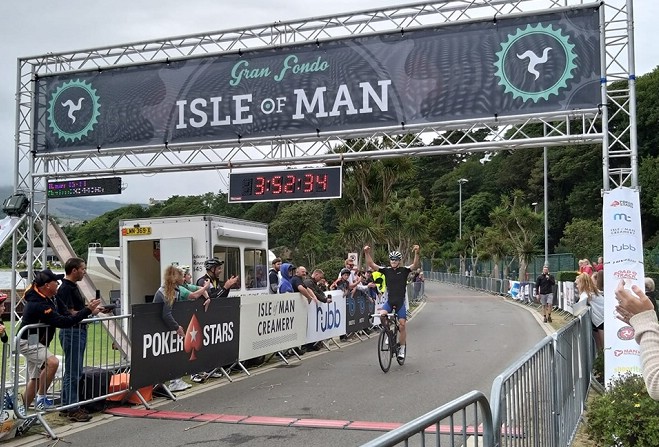 Winners give their reactions to Manx Radio

Nathan Draper has been crowned the winner of Gran Fondo Isle of Man.

He took the title ahead of Liverpool's Philip Williams, with Cal Crutchlow in third.

After completing the 85-mile course, Draper gave Manx Radio Sport his reaction, starting with an update on how his body was feeling:

Sally Walker won the ladies' class, ahead of Ankie Ytsma and Jess Carridge.

Walker also won the Queen of the Mountain prize.

Chris Cave caught up with her afterwards:

Corrin Leeming won the Under 21s event, with Will Draper and Jimmy Bostock making up the podium.

Mark Christian scooped the 'King of the Mountain' title, and the Veteran's Prize went to Gary Johnson.

Having staged Isle of Man Cyclefest for the past three years, organisers say they went in a different direction for 2019, concentrating on the premier event – the Gran Fondo – and delivering more community-focused cycling activity for people of all ages and abilities.

In a post on social media, they said: "to the residents of the Isle of Man we thank you for your patience as our event wound its way past your homes and businesses."

"We apologise for the inconvenience our road closures may have caused and we will strive to execute our traffic restrictions with increased resource and planning to minimise the impact these have on the Island's day-to-day life."