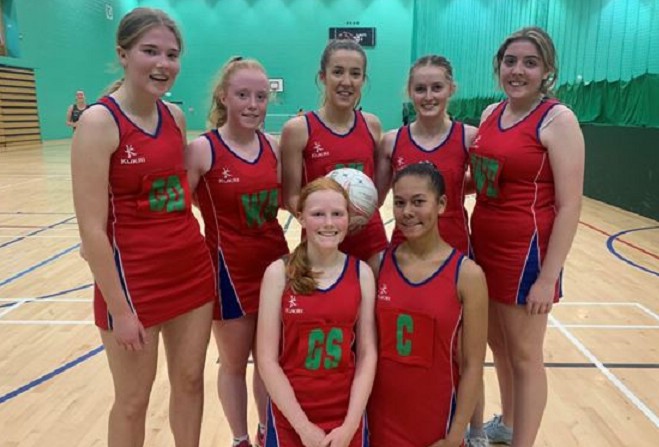 As always, this mid table clash was going to be competitive and could go either way with both teams needing the 3 points before the Christmas break. The game started strongly for Thompson with the defensive duo of Anne-Marie Crompton (GK) and Molly Christian (GD) working well together intercepting and rebounding in the Simcocks attacking circle, meaning the ball could be carried through the mid court players of Mika Chen (WD), Ella Crowe (C) and Fern Christian (WA) into the shooters to ensure a first quarter lead of 13-5 to Thompson.

The break came at a good time for Simcocks where they were able to reset and make changes which saw Leanne Faragher move into the defensive circle with Ashley Skelly subsequently making it much more physical for the Thompson shooters of Kim Hicklin (GS) and Sam Dunn (GA) and restricting the scoring to only 5. The half time score being 18-13 to Thompson.

Unfortunately, an injury to Sam Dunn saw forced changes for Thompson with Ella Clague coming on at WA and Fern Christian moving to GA. This, however, did not phase the girls in purple who were able to put 13 goals on the board compared to Simcocks 6.  The final quarter saw Simcocks play the better netball with Simcocks Helena Allen (GS) and Ella Paige (GA) converting consistently, but unfortunately this was too late in the game to have an impact on the final score, with Thompson coming out eventual winners 40-30 and Thompsons GD, Molly Christian being awarded POTM.

The game started strong for Simcocks who found themselves 2-0 up from excellent shooting from Niamh Coole (GS) and Hannah Skehan (GA). However, the Atla Group Pumas turned the score around, resulting in a 12-5 lead at the end of the first quarter.

Pumas continued in the second quarter, as strongly as they had ended the first quarter with fine shooting from Pumas Alex Cashin (GA) and Hazel Bailey (GS). Simcocks worked hard but could not make a dent into Puma’s lead. The second quarter finished 26-8 in favour of Pumas.

Simcocks made a slight comeback in the third quarter with great intercepts and marking from Claire Parker (GK) and Rachel Craig (GD) but Pumas continued to press on extending their lead with the 3rd quarter finishing 40-15. In the final quarter, Simcocks fought hard and played their game with some great tips from Ashley Skelly (GD) and Freya de Backer (WD), however, Pumas Breeshey Harkin (centre) used her height as an advantage in gaining interceptions. There were some great drives from Simcocks Georgia Mitchell (GS) who passed the ball beautifully to Niamh Coole (GA) who managed to capitalise on these. Simcocks didn’t give up and played a good game against Pumas but just couldn’t make it work on the day. Player of the match went to Pumas Hazel Bailey.

The final game of 2021 and what a feisty one it was, with both teams eager for the win. It was Simcocks who were off to a flying start with Niamh Coole (GA) and Holly Saxon (GS) dominating the attacking circle. As well as the defensive duo of Freya De Backer (GD) and Claire Parker (GK) who were keeping the Ballasalla attackers at bay. Quarter 1 score was 9-3.

No Changes for Simcocks in the Second Quarter, however Ballasalla switched Holly McGowan into WA, where she worked well with Megan Carey ( C ) and they were able to bring the ball down court and deliver some great passes to Rebecca Hands (GA) and Ciara Jackson (GS). The Half time score was 17-8 to Simcocks.

A Couple of position changes for Simcocks in the second half saw Victoria Waterhouse (GD) and Sarah Cain (WD) strengthen the Simcocks defence and they were were determined to hold Ballasalla off and they did just that with some crucial interceptions. The Third quarter is always a “make or break” quarter and Simcocks continued to press and test Ballasalla’s defense of Alicia Kewley (GD) and Claire Crowe (GK). Simcock’s Alice Leadbeater-Terris (C) drove to dictate play in the centre third. The third quarter saw Silvers lead extend even further with a 12-goal difference going into the final quarter.

Ballasalla kept their heads high and with Jo Hicks at GA she ensured that her team got a thoroughly deserved point. It was a great game to play and spectate and what a way to finish for the Christmas break. The final score ended 30-18 to Simcocks Silver with POTM going to Sarah Cain (Simcocks)

Senior Fixtures will resume on the 9 January 2022