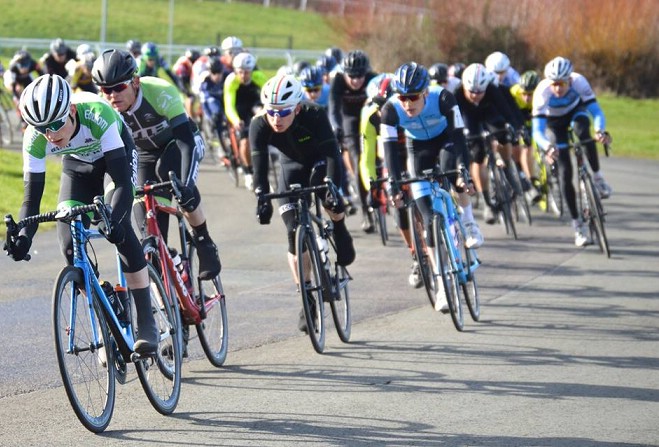 Two Merseyside events in one weekend

The newly formed Equiom Isle of Man Junior Cycling Team opened their season last weekend competing in the Eddie Soens Memorial race at Aintree on Saturday and the Cull Cup and Duncan Sparrow race at St Helen’s on Sunday.

Weather conditions were perfect at Aintree and the handicap race began with a large 1st group of riders that included Harry Cain, Ben Christian, Adam Kelly and Dan Scarffe from Team Equiom IOM.

Jimmy Bostock started in the next group a minute behind.  A further two groups completed the field with the last group being the elite riders, starting 3 minutes down on the first group.

Close to 170 riders started the 50 mile race and at around half distance the groups had all came together on the 1.6 mile circuit.  In the closing stages of the race a group of around 10 riders broke away, a group that included Ed Clancy OBE from JLT Condor and the world junior cyclo-cross champion Tom Pidcock.

The weather condition on Sunday at St Helens could not have been any different.  Torrential rain and freezing temperatures met the riders in the opening category 3 & 4 race that included the team’s Harry Cain and Ben Christian.

By the end of the 24 lap race less than a quarter of the 80 strong field remained in the race and as a result the organisers gave all riders that had completed 19 laps of the 2.2 mile circuit a placing in the results.  Harry Cain was placed 28th, calling it a day after lap 19.  Ben Christian retired after lap 15 with no feeling in his hands making braking impossible in the poor conditions.

Although the rain eased off a little in the afternoon common sense prevailed when the organisers reduced the length of the Elite and Cat 1/2/3 race from 27 to 20 laps.  Jimmy Bostock was the best placed Equiom IOM team rider in 11th, followed by Adam Kelly in 17th and Dan Scarffe in 71st.