No charity shown by Geordies in shield match 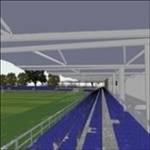 There was a pulsating opening 45 minutes in the first senior match in the Isle of Man ever played on an artificial pitch, and FA Cup holders Rushen United found themselves level at 1-1 at the interval.

Geordies had taken the lead through a brilliant Johnny Myers free-kick, which was cancelled out by a clear penalty, awarded when Aaron Hawley was fouled.

But after the teams had changed ends it was a completely different story, the catalyst for St George's triumph being the introduction of man of the match Chris Bass junior, early in the second half.

He played a superb pass to Frankie Jones, who cooly slotted into the net to make it 2-1, and from then on there was only one team in it. Liam Cowin grabbed the third Geordies goal and Bass made it 4-1, before Keiron McNulty knocked in the fifth, after the Rushen keeper had spilled the ball.

Bass and Cowin each added to their individual tallies to make it 7-1, and Jones got his second, and completed the scoring, about seven minutes from the end.

A delighted Tony Mepham, Manx Radio's football correspondent and a senior Manx FA official, described it as 'a special occasion' for the sport in the Isle of Man, adding that an artificial surface in a modern stadium with floodlights had been needed for a long time.