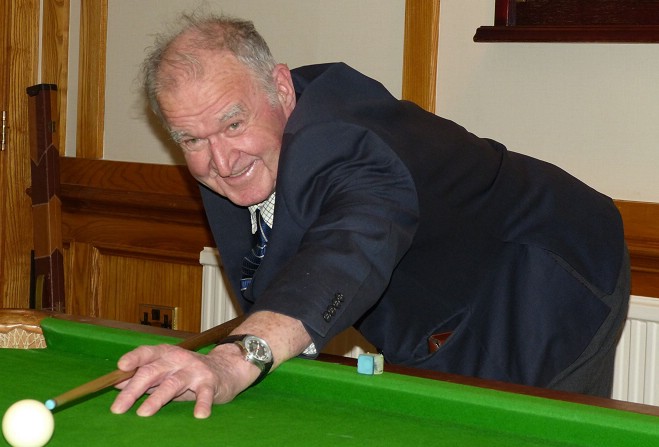 Title secured with one round to go

St Olaves 'Old Skool' clinched the Macs Builders Merchants Manx Snooker League title in emphatic fashion this week, with one set of fixtures yet to play.

They galloped to a 5-0 rout over Douglas Snooker Club 'Wannabes' at home, including wins for John Kennish, Mike Doherty, Brian Howland, Patrick Kerr and Peter Collister.

Kennish had breaks of 40 and 30 in a heavy opening frame victory over Paul McKinstry - and also leads the individual rankings with 16 wins from 21 matches, followed by teammates Collister, Kerr and Howland on 15, 14 and 13 wins respectively.

Joint-fourth in the individual rankings with 13 wins is Calum Gardner of the Finch Hill 'Musicians' - his team sit second after a 3-2 win away at Malew 1, with good performances from Peter Glover, Matthew Dodd and Lee Hunt who had the only 20+ break with a 28.

Brian Kinnish and Eric Drinkwater won for Malew, who remain two points behind their local rivals at the bottom of the table.

The home side won the opening three frames through Chris Dagnall, Nigel Kermode and Chris Murphy, but the visiting 'Mob' fought back with wins for Steve Oates and Tom Miller - Miller had a break of 28 in his one-point win over Steve Munk, and there was also a 24 for Peter Kirkham.

Finch Hill 'Rockets' continued their impressive finish to the season with another 4-1 win, this time at home to Port St Mary Legion - Dollin Mercer took his personal tally to 13 wins with an opening frame victory, before John Spellman, Graham Ashton and Darryl Hill followed suit.

Hill was the star of the show, with breaks of 24 and 20 as he beat Mike Boyle 81 points to 8 - Shaun Roberts got the only win for the visitors.

Douglas Snooker Club 'Bandits' fought back from 2-1 down to win 3-2 at home to St Olaves 'New Skool'.

Ste MacDonald shone with breaks of 28 and 24 en route to an almost-100-point win over Sean Corkish, then Paul Smyth and Benito Mungiovi fought back for the guests, but Graham France and Simon Gardner anchored well for a good win - there was also a break of 22 for Jamie Wilson.

Looking west, Peel Legion emerged victorious in a close fixture against Malew 2 - the visitors won the first and last frames through Mark Quinn and Paul Bridson, but Don Humphries, Mike Crook and John Kelly won for the hosts to bolster their chances of a mid-table finish.