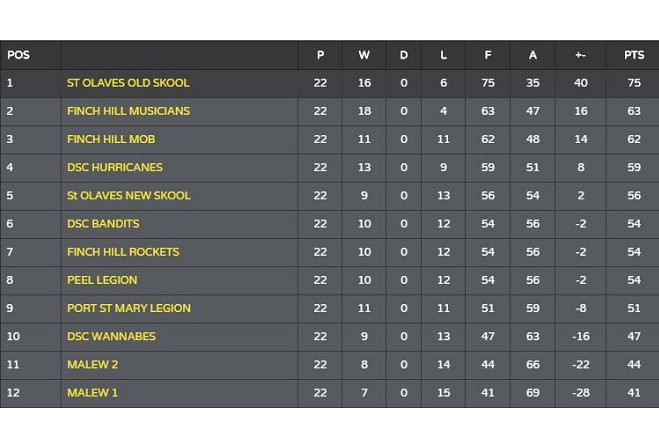 They extended their lead at the top of the table in the final week of fixtures with a 4-1 win away at Port St Mary Legion, in what was effectively a dead rubber for them.

A break of 25 from Peter Collister wasn't enough to beat Shaun Roberts, who also had a 22, in the third frame of five - but the away side won the other four, including a break of 31 for the individual table-topper and reigning Island champion John Kennish.

But wins for Geoff Hall and Mike Crook grabbed important points for the westerners, Mike's frame proving possibly the most one-sided of the season as he won 123 points to 7.

Finch Hill 'Mob' finish third after a 4-1 win in the Finch Hill derby against the 'Rockets' - talisman Ron Grogan rolled back the years to complete a 25 clearance in beating Martyn Lean, but the 'Mob' won the rest.

Peter Kirkham had a break of 41 and Miles Sherman had a 20 in their respective frame wins, and a break of 34 wasn't enough to reduce the deficit for Darryl Hill who suffered his first league defeat of the season.

Douglas Snooker Club 'Hurricanes' and St Olaves 'New Skool' finish fourth and fifth after their battle in Ramsey - with no breaks of note, the visiting 'Hurricanes' won 3-2 after victories for Paul Smith, Nigel Kermode and Steve Munk.

Douglas Snooker Club 'Bandits' could yet again only field four players as they travelled to Malew 2 - the score was 2-2 after wins for Ste MacDonald and Zain Abideen for the away side were cancelled out by Paul Bridson and Mark Quinn, but Malew took the tie with a walk-over win in the fifth.

Finally, Malew 1 finish the season in the wooden spoon position after a 3-2 loss away at Douglas Snooker Club 'Wannabes' - Eric Drinkwater and Roy Gelling won for the guests, but Steve Cowin, Paul McKinstry and Stephen Harvey secured a rare win for the hosts.