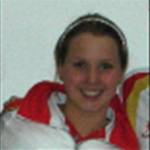 In this morning's heats, the 15 year old qualified as fifth fastest in record-breaking style.

She set her second new Isle of Man Junior and Senior Long Course record of the meet in a time of 2 minutes, 24.32 seconds.

Her third Manx record swim came in the 100m Freestyle heats where she finished 10th overall with her time dipping under the minute mark for the first time.

Her new standard of 59.77 seconds beat her old Junior record but was also inside the Senior record set by Emily Crookhall-Nixon in March 2006.

Another hard luck story for the swimmers though - Grant Halsall missed making the final of the 200m Backstroke by one place when he set the ninth fastest time in the three heats.

Grant also competed in the 100m Butterfly heats where he came home in 19th spot.

Also in the pool, Heather Millar has produced a personal best in each swim. Her results today were 13th in the 100m Freestyle and 16th in the 100m Butterfly.

In the shooting, Daniel Shacklock is in contention for a medal after the first day of competition in the Skeet. The 14 year-old is currently sixth on countback with a score 67 birds out of 75, which is one behind third and two back from silver.

There are a further 50 targets to shoot tomorrow.

In Athletics, Tom Richmond crossed the line in sixth place in heat one of the 800m in a time of 2 minutes, 0.36 seconds - placing him 14th out of the 25 competitors.