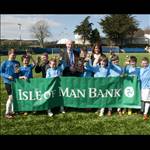 Onchan retained the trophy when the annual Isle of Man Bank-sponsored Douglas and District Primary Schools Football Tournament was staged at the Bowl in Douglas.

There was a record entry of 18 teams and the final, between Onchan A and Fairfield A, went to a penalty shoot-out following a goalless draw.

The event was organised by Onchan School head Jo Richardson in conjunction with the Isle of Man Football Association and, after the final, she thanked the referees for their assistance before introducing Shaun Gritton, Relationship Manager in Isle of Man Bank's Business Banking section, who presented the shield and trophies.

Mr. Gritton congratulated all the teams on the quality of their football - as well as the sportsmanship displayed - adding he had spotted some stars of the future.

Teams had been divided into four groups with the top two in each going through to the quarter-finals.

There were many tight matches with runners-up Fairfield having been involved in two penalty shoot-outs on their way to the final and then another one in the final itself.

Results from the latter stages: