Peel picked apart but persist at the pinnacle 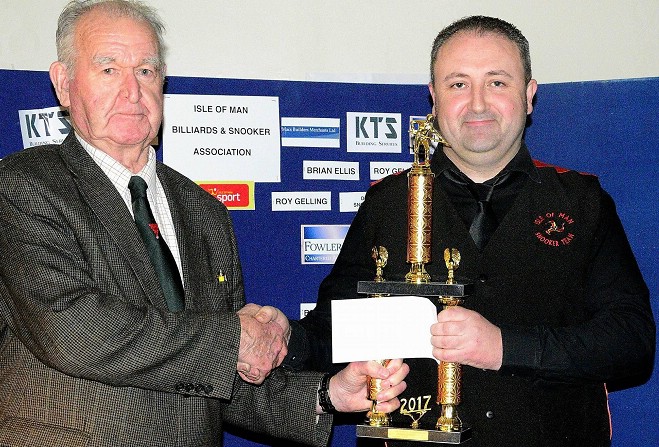 They both won their frames away at Malew 1, but David McCallum, Don Humphries and Jim Caley lost theirs to see the westerners slump to their first loss of the campaign.

John Faragher, Eric Drinkwater and Nick Crouchman were the winners for the home side, who climb to sixth after the win.

The third individual who keeps a perfect score is one of the Island's elite, Sean Corkish, of St Olaves in Ramsey.

His team sit second, despite now being the only side unbeaten in the league - they won 3-2 this time out, away at Douglas Snooker Club 'Wannabes'.

Corkish had a break of 33, and there were also wins for Benito Mongiovi and James Kerr - Paul Smyth had a break of 26, but it wasn't enough to catch Stephen Harvey, who won for the home side along with Fred Corris.

Douglas Snooker Club 'Hurricanes' are third after a 3-2 win against the DSC 'Newbys'.

Chris Murphy, Chris Dagnall and Paul Smith, with a break of 22, maintained a strong start for them, and Ste MacDonald and Simon Gardner were the winners for the 'Newbys'.

Fourth are the Finch Hill 'Mob', who had a tough trip south to face Port St Mary Legion.

They started well, going 2-0 up through Martyn Lean and Steve Finnegan, but it was all downhill from there - Marc Morley had a break of 24 as he inflicted Peter Crellin's first loss of the season, and there were also home wins for Shaun Roberts and Terry Boyle to complete an impressive comeback.

Malew 2 have leapt up the table to fifth after coming very close to recording a whitewash away at Finch Hill 'Musicians'.

Alec Oates, David Quayle, Tony Pring and Paul Bridson all won quite convincingly to go 4-0 up, and it took a break of 24 from James Hynes to grab a last-gasp consolation for the home side.

Finally, two struggling Finch Hill sides went head to head, as the 'Rockets' were victorious against the 'Young Guns'.

'Rocket' Ron Grogan, Marek Kenny and Paddy Delaney won for the home side, with breaks of 27 for Kenny and 23 for Delaney.

Will Duquemin won his second black ball game in two weeks to beat John Spellman, and Darryl Hill won a scrappy final frame against Association Chairman Ken Kinrade to restore some dignity for a 'Young Guns' side who were hotly tipped to do well at the start of the season.