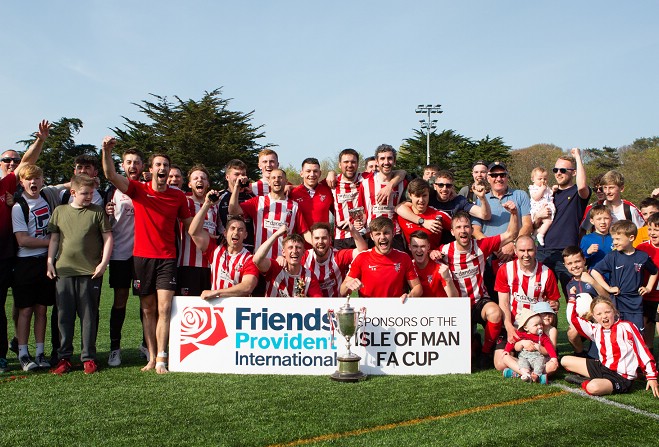 Two goals in extra-time saw Peel defeat St Marys 3-1 in the FPI FA Cup final as the westerners clinched their second trophy of the season.

Shaun Kelly had given his side a first-half lead before both he and St Marys man Josh Thomas were sent off for an on-field altercation.

Six minutes from time, St Marys levelled after a corner was headed in, despite protests from the Peel players who though the ball hadn't crossed the line.

But it was Peel who found the breakthrough in extra-time as Rhys Oates and captain Daniel Bell scored in quick succession to put the match beyond the reach of Marys.

The triumph adds to the Railway Cup the Douglas Road club lifted on Boxing Day.

Kelly gave them the lead after around half an hour with an outstanding left-footed strike which flew past Marys goalkeeper Kiril Velev and into the top-right corner.

The Saints pushed for an equaliser as the game entered its closing stages, and they were rewarded for their efforts when they scored from a set-piece of their own with the full-time whistle looming.

With no further goals in the regulation 90, extra-time was needed to determine the winner.

Peel regained their advantage when Rhys Oates kept his cool to send a stunning free-kick into the top corner.

Moments later, skipper Daniel Bell made sure of the victory by finishing from close range to deliver the hammer blow.

It's a record 32nd time in their history that Peel have lifted the trophy and marks their first success in the competition since 2016.