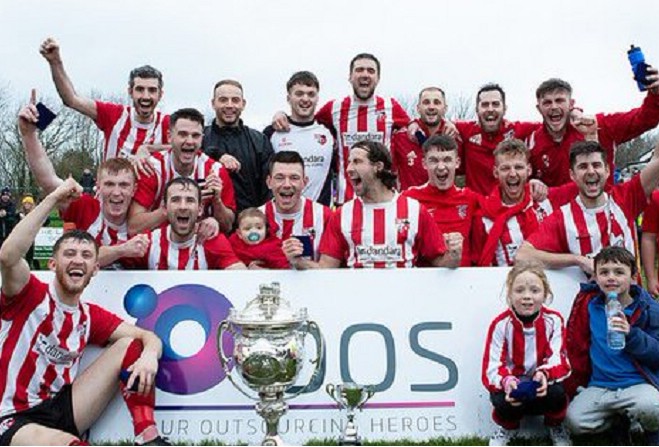 Tom Wood struck at the death as Peel beat St Georges 3-2 in a thrilling Railway Cup Final at Ballafletcher.

A goal from Ciaran McNulty either side of the break had looked set to take the match to extra-time.

Lee Gale scored from the spot before an unfortunate own goal from St Georges goalkeeper Glenn Walker had given Peel a 2-1 lead at half time.

And with the seconds ticking down, Tom Wood’s deep cross evaded everyone, hitting the far post and going into the back of the net to spark pandemonium in the stands.

Their first triumph in the competition since 2009/10 was far from straightforward.

Immediately after the first whistle, a long ball forward from centre back Johnny Myers put St Georges striker McNulty through on goal, but his effort was kept out by Owen Dawson.

The resulting corner was eventually headed in by McNulty as Geordies made a dream start to their record-equalling ninth successive Railway Cup Final.

Ten minutes later, referee Andy Lodge pointed to the spot after a cross into the St Georges penalty area struck the hand of Chris Bass, jr.

Gale stepped up and made no mistake as his low, drilled shot found the back of the net to restore parity.

Peel then took the lead after Daniel Bell’s shot from the edge of the 18-yard box cannoned off the post, rebounding off the outstretched Walker, who turned and watched helplessly as the ball bounced in.

The westerners appeared to be in control for the remainder of the first period, carving out a number of chances.

Kerron Christian had the best of the opportunities, poking the ball wide of the mark from six yards out after some neat work by fellow front man Rhys Oates.

It could have been level at the interval, as the pace of Bass saw him beat the Peel back line, only for his lobbed effort to bounce agonisingly wide of the post.

The second half saw an improved St Georges find an equaliser after a superb one-two with Furo Davies allowed McNulty to slot the ball under the advancing Dawson in the Peel goal.

Peel thought they’d scored a third after a free-kick was converted by Wood, but it was ruled out after a foul in the build-up.

That appeared to rouse St Georges, who brought on Callum Morrissey in an attempt to find a winner.

A fifth goal did eventually come with seconds to play, but for Peel, as Wood’s late cross into the box caught the inside of the upright and went in to the delight of their hoardes of supporters behind the goal.

The win secured their 22nd triumph in the competition and won them the first silverware of the 2018/19 season.