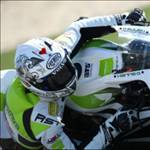 Andrew Pitt produced a heroic performance at the latest round of the World Supersport Championship in Salt Lake City at the weekend.

The Peel resident and defending champion started the race at the back of the grid after a huge crash in qualifying, but battled his way through the field to finish seventh.

Pitt suffered bad bruising and concussion as a result of his spill, which was caused by a warped brake disc, and spent Saturday afternoon in hospital undergoing treatment.

Speaking after the race he said, "Although I felt tired and unwell, I decided to give it a go in the race from the back of the grid."

"But if someone had told me yesterday that I would finish seventh today, I would have signed on the dotted line there and then."

"I'm really happy with the end result, however, the weekend should have been much more of a success and this run of bad luck needs to end soon".