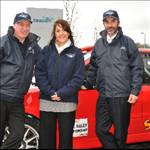 More than 70 crews have signed up for this year’s Manx Telecom Rally.

Fans will see eight World Rally cars in action as some of the top drivers in the British Isles battle it out in an exciting weekend of action.

It will begin in Port Erin on the evening of Friday, May 7 for the first of five stages and, following an overnight halt, competition will resume the following morning.

The rally reaches its conclusion at the TT Grandstand on the Saturday afternoon, with prize-giving taking place at the Villa Marina, Douglas, later that evening.

John Cope and Kirk Michael’s Rob Fagg also have an Impreza, while the pairings of Damian Cole/Craig Drew and Hugh Hunter/Andy Marchbank will be in Ford Focus WRCs.

Hyundai Accent WRCs will be driven by Mark Jasper/Don Whyatt and Gareth Nuttall/Paul Whittaker, while John Stone/Lee Carter will be gaining further experience in their recently-acquired Skoda Fabia WRC.

Dave Corris, from Douglas, will have Paul McCann reading the route notes in his Ford Escort WRC.

Although not in World Rally cars, defending British Rally Champion Keith Cronin and team-mate Euan Thorburn are using the rally for some practice prior to Rally Isle of Man in July and have entered in identical Subaru Impreza N15s.

Mark Ellison, Chairman of Manx Auto Sport Ltd, thanked Manx Telecom for its continued support of the event and said that with late entries still coming in as many as 80 competitors may start the rally this year.

"At a time when many rallies are struggling to attract entries the Manx Telecom Rally is still as popular as ever."

"We may even exceed the number of entries we had last year.

"Even though the rally is no longer part of two championships we already have the same number of entries as last year, which goes to show how important the Manx Telecom Rally is to competitors."

The rally is the second round of the Richard Egger Insurance MSA Asphalt Rally Championship and, for the past four years, contenders have voted it 'Best Event in the Championship'.

Following the retirement of John Skinner after the 2009 event, Alan Teare has taken over the reigns as Clerk of the Course.

Organisers are keen to hear from anyone who wishes to volunteer as a race marshal, go to manxnationalrally.com for details.