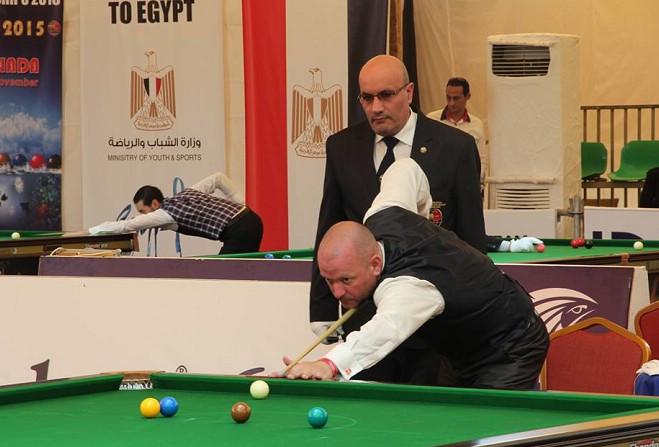 John Kennish of the 'Old Skool' at the IBSF World Snooker Championships, 2015

Week 13 of the Macs Builders Merchants snooker league was to be an unlucky one for the league leaders.

St Olaves 'Old Skool' would have been confident of a win, at home against bottom-of-the-table Malew 1, but the Ballasalla outfit went 3-0 up through Nick Crouchman, John Faragher and Eric Drinkwater to seal a rare victory.

The northerners fought back well, though, with yet another win for Peter Collister and an outstanding individual performance from Island Champion John Kennish - John hit breaks of 60, 37 and 27 to win the final frame 128 points to 56.

Second-placed St Olaves 'New Skool' failed to capitalise on their rivals' mistakes - they travelled to a resurgent Finch Hill 'Rockets' who have a habit of finding their form in the second half of the season.

The 'Rockets' went 4-0 up with a series of convincing wins from John Spellman, veteran 'Rocket' Ron Grogan, Graham Ashton, and Dollin Mercer who had a break of 22.

But Sean Corkish proved again why he's the form player on the Island at the minute, steadying the ship with breaks of 26, 23 and 20 to beat Doug Kinrade and avoid the whitewash.

Douglas Snooker Club 'Hurricanes' remain in third after a 3-2 win against Finch Hill 'Musicians' - it could have been more, but a succession of bits of good fortune helped Matthew Dodd beat Chris Dagnall, much to the amusement of an entertained crowd.

Finch Hill 'Mob' sit joint third after a 4-1 victory away at Malew 2, a 25 break from Miles Sherman capping off a good win in the final frame.

Port St Mary Legion are the third team in joint third place, on 36 points, after at 3-2 win at home against Peel Legion.

Don Humphries starred for Peel with breaks of 30 and 22 - there were also breaks of 20 for Peel's Kyle Darby and 21 for Port St Mary's Shaun Roberts.

Zain Abideen had a break of 23 and Graham France had a 21 in a fast start for the 'Bandits', with Stephen Harvey grabbing the consolation for the 'Wannabes'.

Now five points clear at the top, can anyone catch the 'Old Skool'?