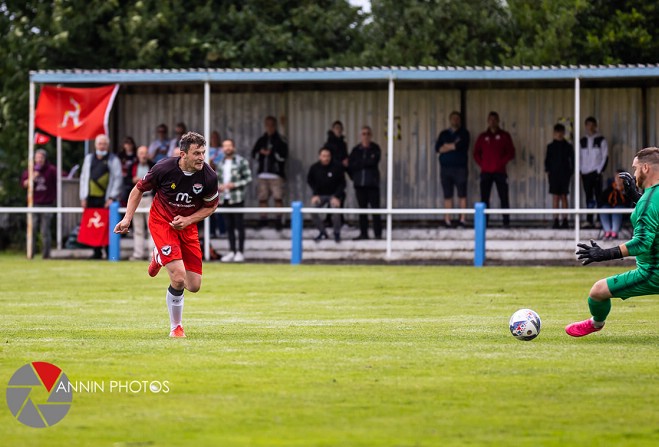 History was made on Saturday (31 July) as FC Isle of Man came home with a point from their first ever league encounter against Maine Road.

It was a dream start for Chris Bass' side as captain Frank Jones put the visitors 1-0 up inside ten minutes.

The hosts levelled shortly before half-time through a Jamie Roe half-volley.

Ste Whitley squandered a glorious second half chance for FC Isle of Man to regain the lead from the spot as the match ended in a stalemate.

There was a real buzz around Brantingham Road as supporters saw FC Isle of Man in competitive action for the first time, with the visitors making a bright start to their debut in the North West Counties Football League.

Jones made the most of the early pressure when he was played through on goal, slotting home cooly from 12 yards to become the Ravens first ever league scorer.

His game was cut short moments later though when a knee injury saw him replaced by former Peel attacker Lee Gale.

The impact was almost immediate; a Whitley cross eventually bounced up for Gale whose volley crashed against the underside of the crossbar before bouncing clear.

Whitley was causing problems for Maine Road full-back Ismail Suleiman, but a penalty shout on the half-hour mark was waved away by the referee.

After being caught cold by the Manx side's quick start, the Sky Blues gradually grew into the game; making their dominance count five minutes before the interval.

A long ball forward was nodded down into the path of Roe, whose half-volley into the ground eventually nestled in the back of the net beyond the reach of Ravens goalkeeper Dean Kearns.

Midway through the second period, Dan Simpson was brought down in the penalty area after some neat work by Gale, with the referee this time having no hesitation pointing to the spot.

Whitley's resulting penalty down the middle was kept out by Maine Road stopper Pete Monteith, however, and the rebound bounced agonisingly over the bar as the scores remained level.

A frenetic finale saw chances at both ends but there were no more goals as FC Isle of Man settled for a point in their first taste of English non-league football.

Speaking after the full-time whistle Chris Bass, FC Isle of Man manager, said it was a positive start: