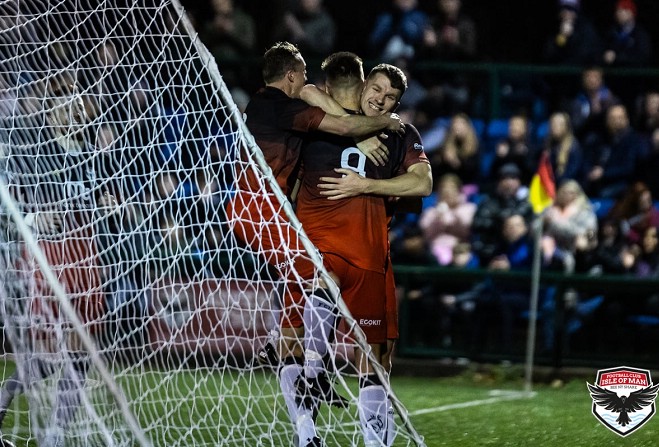 FC Isle of Man made it five wins in a row after edging past Rocester 2-1 at The Bowl last night (13 November).

After spurning some early chances and some fine goalkeeping from Rocester goalkeeper and Man Of The Match, Charlie Wood, the Ravens took the lead on 17 minutes.

Captain Jack McVey cooly slotted home from the penalty spot after Luke Murray was brought down in the penalty area.

Despite controlling large amounts of possession, the Manx side had to settle for a 1-0 lead at the break with only a handful of half chances going the way of the visitors.

But just four minutes after the restart, the Island team doubled their lead when a pinpoint cross by Lee Gale from the right found an unmarked Sean Doyle who powered home a header low past Wood to make it 2-0.

With just over twenty minutes left though a turn in atmosphere when Gale was shown a straight red card for an off-the-ball incident to reduce the Ravens to 10 men.

The nerves then rose a little more on 72 minutes when Rocester - who’d struggled to create many clear openings throughout - got a penalty of their own when Ryan Burns was judged to have pulled down Alexander Cimino.

Rocester captain, Cavan Holford made no mistake dispatching a super spot kick low into the bottom left corner to make it 2-1.

But Rocester were also to finish the contest a man down as substitute Rory Regan was shown a second yellow card for dissent towards the referee with just two minutes of normal time remaining.

Despite a nervy last few moment, the crowd of over 2,100 fans were ultimately happy at the full time whistle as FC IOM held onto that score line to take all three points

FC Isle of Man’s next fixture will be at The Bowl against Maine Road at 6.30pm next Saturday (20 November)