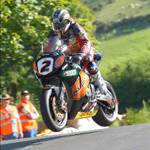 John McGuinness threw down the gauntlet in the first race of TT 2009 as he grabbed a brilliant Superbike victory and broke his absolute lap record in the process.

The Morecambe Missile set a new Superbike record of 129.779mph on his first lap from a standing start then set the new mark on the second circuit, hitting 130.442mph

McGuinness crossed the line in a new race record of 1 hr 46 min 7.16 secs, ahead of HM Plant Honda team mate Steve Plater and Hydrex Honda's Guy Martin, who were second and third respectively.

After taking his TT wins to 15, one ahead of the great Mike Hailwood, McGuinness said he'd planned to lead from the front: (audio clip attached)

Ramsey man Conor Cummins was going well early on, alternating between second and third on the first couple of laps, but lost a lot of time on his first pit stop as his mechanics fixed his chain.

His luck got even worse as his engine blew up at The Verandah on the final lap when he was sixth.

It was a disappointingly short race for one of the favourites, Bruce Anstey, as he retired at Ballacraine on the first lap.

Ryan Farquhar retired in pits at end of the first lap, while Michael Dunlop called it a day in the same place at the end of lap four.