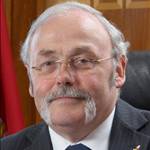 Tomorrow's general election will see the start, and continuation for a further five years, of many political careers in the Isle of Man.

But Thursday is also the day two veteran members of the House of Keys officially call time on theirs.

David Cannan and Tony Brown, the outgoing chief minister, have stepped down as MHKs for Michael and Castletown respectively, after decades in position.

Mr Brown says it's been a bit odd to not be involved in the cut and thrust of the campaign trail, after so long: