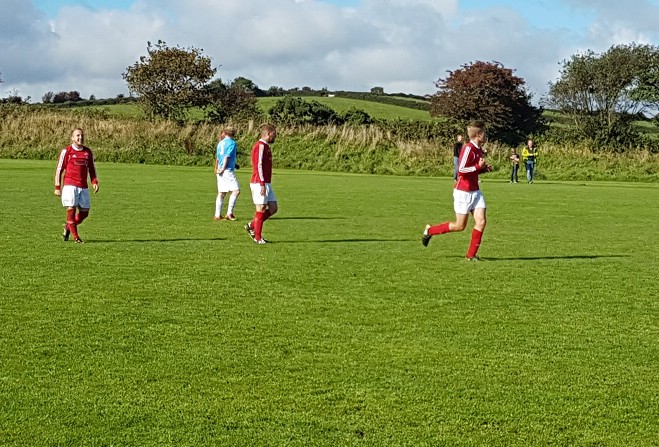 An ill-tempered southern derby went the way of Castletown in JCK Division Two on Saturday.

A late goal from Ashley Sansbury sealed a 4-3 victory at Clagh Vane after 10-man Malew had fought back from 3-1 down against a Town side which finished with nine men.

Both sides were reduced to 10 players each when Tom Doherty and Dean Kinley were sent-off during two mad minutes in the first half before Alex Crawley headed the visitors in front with the final action of the first half.

The second half produced a topsy turvy encounter with Malew equalising through the impressive Kieran Krypner before Town took charge to race into a 3-1 lead courtesy of a Sansbury penalty and Crawley’s second.

The hosts fought back to level again with Dale Walker and Darren Flanagan netting, while Town were reduced to nine men after defender Richard Foden received a second booking.

They weren’t to be denied, however, when Sansbury hit the winner to make it three wins out of three for Castletown.

The new signing from St Mary’s was joined on the scoresheet by Barry English, Craig Cowin and James McGinn as Pully ran out comprehensive winners, racing into a 4-0 lead by the break.

Ramsey Youth Centre were in fine form as Harry Weatherill, Tony Bayle, Ste Grose found the net in a 3-1 home success over Onchan.

Ayre United’s encouraging start to the season ended with a 5-2 reverse at Douglas and District.

A Mark Quirk hat-trick, one from the penalty spot, Daniel Stewart-Clague and 17 year-old Owen Stewart, with his first senior goal, were the men on target.