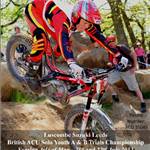 The Isle of Man Youth Trials Club hosts the Franklin’s Trophy Trial, rounds 3 and 4 of the Luscombe Suzuki Leeds British ACU Solo Youth A & B Trials Championship, this weekend.

A good entry of 40, consisting of 26 B class riders and 14 A class riders, will be travelling across the Irish Sea to tackle the two days of picturesque riding along the rugged, volcanic coastline around Scarlett.

Each day will be made up of three laps of 12 sections.

From the start field on day one, the trial will head along the coast toward Castletown and on day two they will turn right toward Pooil Vaaish.

The pick of the bunch from the A class riders ahs to be Jack Price, who is currently leading the championship with two wins from two rounds.

He will be hoping to extend his lead over Iwan Roberts, who is sitting in second place, followed by Brad Bullock and Luke Walker.

The chasing group are all tied on 30 points each coming into the third round.

Any one of the top four are capable of taking a win and the battle is set to continue to make for an interesting contest.

In B class, it’s Dan Peace who is currently in control of the championship.

Billy Bolt took the win in round two and currently sits fifth in the championship.

There will be some local riders taking part and will be trying their best to gain some British Championship points on home soil.

Oliver Lace will be flying the flag in the A class while Aaron Peniata, Ashley Gardner Jnr, James Everitt and Juan Lace will be making their British Championship debuts in B.

All the action starts at 10am on both days.

Parking will be available within the start field, which is accessible from Queen Street and will be signposted from Castletown Square.

Scrutineering and signing-on will begin at 8.30am and there will be an observers briefing at 9.30am.