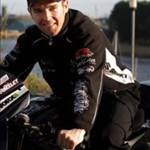 Irishman Alastair Seeley won the feature Superbike race to complete a double at the North West 200 on Saturday.

Michael Rutter joined Joey Dunlop on 13 wins at the North West after victory in the Superstock race.

Rutter is now the joint second most successful rider at the North West and sits two behind the late Robert Dunlop.

Morecambe man McGuinness finished ahead of Seeley with Australian Cameron Donald in third.

Conor Cummins and Dan Kneen were the best of the locals with seventh and eighth place finishes.