Shooting: 19 take part in Round 1 of CPS Summer League 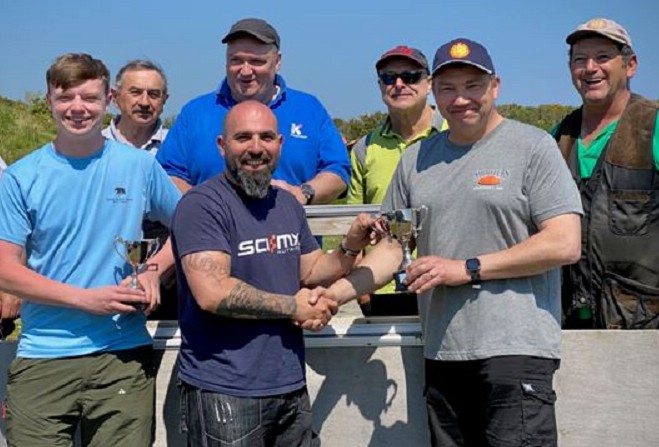 The afternoon of Saturday, 29 May saw 19 competitors taking part in the first round of the Isle of Man Clay Pigeon Shooting Club’s annual Pro Sporting Summer League in perfect conditions, kindly sponsored once again by Pam & Dave Corlett.

With each participant completing a challenging course of 50 targets, class B shooter Will Rand seemed unstoppable after the first round with 19 points from a possible 25, leading A class shooters Dave Corlett and John Moore with 18 a piece, followed by Marty Kneen on 17.

Round two saw a 3-way at the top between Rob Corlett, Ben Richards and junior David Cowin, each with 21 points from a possible 25. Richards secured the A class category with 37 points, leaving Moore and Kneen in second place with 36 each. Rand went on to claim top spot in B class with 35, closely followed by Cowin on 34 with Brian Faragher and Peter Kelly sharing second place on 32. Class C was scooped by Nicky Barnett on 18.

Conditions were once again ideal on Sunday (30 May) with nothing more than a touch of lingering sunburn troubling the 14 competitors taking part in our annual Fabrizio Cup, a hotly contested 125 target event spanning all major disciplines, generously sponsored by Pietro and Giulio Fabrizio.

Seasoned A class all-rounders Neil Parsons, Paul Mihailovits and John Moore dominated the first round of English Skeet with 72 points each, leaving Peter Kelly and Mark Barnett in second place with 69, and Brian Faragher, Pietro Fabrizio, Jackie Clague, and junior David Cowin all level in third with 66.

A similar story unfolded during the Down The Line (DTL) round, with Parsons and Moore again sharing the lead on 72 points, and Mihailovits, Faragher, and Clague on 69, 65, and 64 respectively. Barnett slipped from joint second to second from last, joining his wife at the bottom of round two.

Olympic Skeet was on the menu for the third round of the day, and saw Stan Cross romping home at the top with 69 ahead of Giulio Fabrizio on 66, followed by Parsons with 60 and Moore on 54. Clague rallied gamely with his side-by-side but wasn’t able to replicate the success of his previous two rounds, crossing the line with 18 from a possible 75.

The Automatic Ball Trap (ABT) round once again saw Moore and Parsons battling it out at the top with 69 apiece, leaving Mihailovits and Faragher sharing second on 63, and Will Rand and Giulio Fabrizio third with 57.

This year, the final round of the Fabrizio Cup consisted of 25 English Sporting targets across three stands; 5 instant pairs, 5 on-report pairs, and 5 singles. Parsons was well and truly into his element here and cleaned up with a perfect 75, closely followed by Mihailovits and Fabrizio on 72, with Faragher, Kelly, and Barnett each bagging 69 points.

Taking home the Fabrizio Cup in 2021 is Neil Parsons (348 points) with Paul Mihailovits heading A class on 330 points, and Brian Faragher at the top of B class on 314. The team event was won by Parsons and Clague with a combined score of 616.

Results can been seen in full here, where you can also find out more about the club and register for the annual Hospice charity shoot on 26 June.