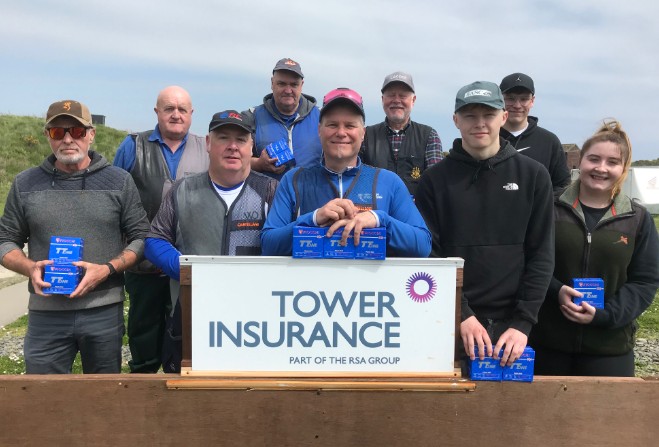 The third round of the Tower Insurance DTL league was held at Meary Veg Santon with twenty competitors taking part in near ideal conditions.

The joint leaders after the first round were A class shooters Mike Walker and Mark Riley with perfect 25/75 rounds in equal third place were John Moore and junior Arran Wade also with 25 straights but for 73 points, another junior Joe Faragher also had a straight but for 72 points. The leading B class shooter was Calum Craine with 72 points . The leading C class shooter was lady shooter Allana wade with 62 points.

120 points with Rob Marshall taking second place on 125 but taking C class with 128 points mainly thanks to a second round of 24/71 was Mark Sweetman.

In the afternoon the third round of the Sadler Agricultural Supplies ABT league was held with the Faulkner highgun cup and the Kelly handicap cup up for grabs.

Mark Riley was the first round leader on 24 with Rob Watterson and Alan Wade in equal second place on 23. After the second round Mike Parr finished in third place on 45 with Alan Wade taking second place on 46 but piping them all with 47 points and winning the Faulkner cup was Rob Watterson. Winning the Kelly handicap cup with 54 points was Mike Parr Results 1st R Watterson 23,24=47,2nd A Wade 23,23=46 3rd M Parr 21,24=45, Handicap cup M Parr 45+9=54.

Also in the afternoon the third round of the Manx Petroleum's Olympic skeet league was held with the Cannell Crossing cup up for grabs. The leader after the first round was Dave Corlett with a score of 23 in second place on 21 was David Clague with Jeff Corkill third on 19. After the second round Jeff Corkill finished in third place overall with 39 points, in second place with

42 points was Dave Corlett but top of the shop with 45 hitting 24 in his second round was Dave Clague who also won the Cannell crossing cup .

On Saturday afternoon a Sport trap selection shoot was held for selection for next years Islands Games. Michael Cross, Neil Parsons and Marty Kneen finished in equal first place with 79 points, Ben Richards was forth on 76 with Jack Kneen and Mark Riley in equal fifth place on 75 Many thanks to Stan and Brian for setting up the four layouts with some very interesting targets.

Next week is the third round of the Colin Bowen Memorial English skeet league, entries close at 10am Duty officers this week are J Corkill and P Kelly Peter Kelly