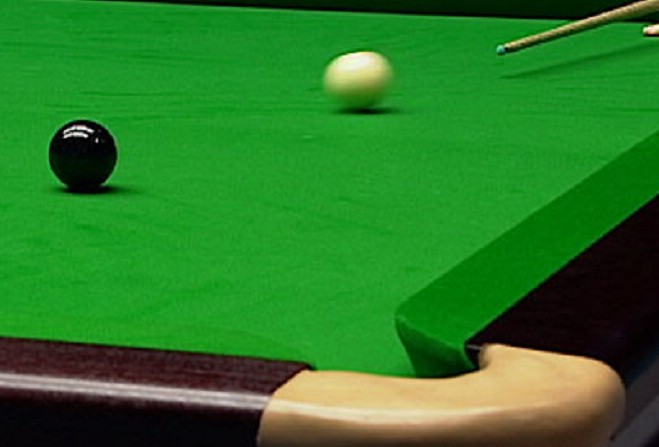 With over a quarter of the season complete in the Macs Builders Merchants Snooker League, Finch Hill Musicians brought out big hitters, Collister and Kennish for their first outings of the season, as the last unbeaten team visited leaders Cue Zone Blinders.

Calum Gardner 69-58 Peter Collister, a 27 break gave Gardner the lead but Collister clawed his way back. There was a crucial shot on the yellow when Collister potted it but got more reaction than he wanted and screwed in-off. Gardner picked off the colours. Ivan McMaw 45-72 Mike Doherty saw the Doc have more than his fair share of run and that made the difference. Scott Campion 64-39 Trevor Peace, Campion played a solid frame to inflict a rare defeat on Peace. There was a time when Campion looked to be playing on another table when he chipped the white over the pink and it nearly landed on the next table! But he regrouped and played a good frame to win and lower his handicap. Brandon Forrester 15-71 Vic Rigby, Rigby used all his experience, with his start and just potting odd balls and hiding the cue ball. Some unlucky fouls and in-offs for Forrester saw the frame quickly disappear. In the decider between Darryl Hill and John Kennish, Hill got in the balls after Kennish had had a few chances and put together a 40 break to get the all important win, 73-10.

Newbys stay second but were convincingly outscored on aggregate 262-317 as Malew came from two down to take it to a decider. Tony Pring of Malew was the stand out performer defeating Abideen by more than his handicap start. Frame scores, Johnny Myers 63-48 Alec Oates, Mikey Booth 68-46 David Quayle, Adam Dooley 45-85 Eric Drinkwater, Zain Abideen 22-84 Tony Pring and finally Simon Gardner 64-54 James Goodwin which was settled on the pink.

The reigning champions put in their best performance so far, keeping Reprobates down to just 44 points in total off their own cues during frames, 1, 2, 3 and 5, Paul Smyth reports. Adam Blake 60-9 Danny Russett, chances for Russett were at a premium as Blake potted his way to a strong win. Darrell Thacker 78-31 Rob Callister, a nice 22 from Thacker with his usual firm potting amassed a good lead despite some unscheduled background noise, again won well. Paul Smyth 81-50 Chris Killey, the St Olaves captain had his eye in, only missing two pots, with long pots hitting the leather, and good position play he had a 26 and 23 along with a couple teen breaks to take the lead and close out the win, for his fastest frame to date! Dave Kelly 39-57 Paul Tangeman, both started well but Tangeman slowly extended his lead. A few missed pots from Kelly which he would normally pot, saw him needing snookers as his unbeaten opponent went on to another win. James Kerr 83-73 Rhys Moore, Kerr started slowly chasing a 63 start with the big colours safe, but with good patience he got them open. A tasty 40 break followed and he was right back in the frame, cleverly closing out the win and a deserved result for St Olaves.

But for two black ball wins, Hurricanes could have registered back to back whitewash losses, which to be fair would have been an unfair result. Don Humphries 70-57 Jamie Wilson, was one that got away from the Hurricanes man. An early break of 28, all pinks and some good, patient safety play had put him ahead. However, three unforced fouls when missing thin snicks on reds gave Humphries a dozen bonus points and a strong finish on the colours from the Peel veteran who won with a cross doubled pink to a corner bag. Barton Beaumont 60-66 Stuart Littlewood, chasing a 35 start, Littlewood only took the lead when potting the final blue. A bad safety left Beaumont in prime position needing to roll pink and black to opposite middle bags. The pink disappeared but he twitched on the black which Littlewood tucked away. Mike Crook 57-44 Shaun Roberts, stronger potting from Roberts reeled in Crook and saw him five ahead on the final blue. Crook cut in a fine blue to the centre plus an easy pink, then played a good safety leaving the black and cueball on opposite side cushions. Roberts, trying to leave maximum distance between the balls, misjudged the pace and the cueball agonisingly dropped into the yellow bag. Geoff Hall 57-62 Paul Smith, an early miscue from Smith left him missing a chunk from his tip and a red bouncing twice off the leather of a corner bag before returning to the table. This didn’t prevent him having a 20 break which included a fortuitous black, doubled off the bottom cushion into a middle bag while trying to get it into the open. Hall later replied in similar fashion and when potting green, brown and blue he went to drop an impossibly tight frame ball pink into the middle, but it stayed up. Smith cut it in, then almost overhit the black into the other middle pocket, the ball doing a full lap of the pocket before deciding to drop. With Hall not playing in his usual anchorman role, the insomniacs amongst the faithful few were denied the treat of a Hall/Gary Conwell encounter in the decider, but John Kelly proved an able replacement. Conwell had nearly caught Kelly’s 21 start by halfway with some solid pots, however Kelly grew in confidence as Conwell started to miss a few and he went clear again. Needing two snookers on the yellow the fun started as Conwell really put Kelly through the mill. Eventually Kelly succumbed to one of many snookers, and so many times could have conceded another as Conwell tried and tried. Eventually, after thirty minutes on the colours Kelly took brown and blue and his ordeal was over, Kelly 63-39 Conwell.

The Rockets go joint third with a game in hand and Jacksons remain winless, Graham Ashton reports. Matt Radley 70-35 Mike Reddington, once again Radley won well and will be in for a handicap cut in due course. Graham Ashton 69-28 Kam Virk, a few low teen breaks from an in form Ashton with some good run, whilst Virk had the opposite including two notable in-offs. Marek Kenny 84-30 Dave Cavanagh, Kenny played extremely well, breaks of 24 and a few low teens too, he dominated the game. Cavanagh battled on requiring several snookers and getting a couple of beauties, but the damage was done. Jonny Hogg 70-38 Richard Hillier, early on Hogg potted good reds but failed on the colours. He then cut a tough red into the middle and grew in confidence after that, helped by a couple of superbly laid snookers and unplanned ones, he had Hillier needing snookers before at start of the colours. Doug Kinrade 37-47 Alex Sinclair, quite an even match with lots of missed opportunities by both. Kinrade, 15 behind with just pink and black left, Sinclair potted a great long pink but the cue ball went in-off in the middle, so Kinrade needed both to win. Kinrade got the pink but rattled the black, leaving it over the top pocket for Sinclair, who potted it but the cue ball came dangerously close to dropping into a bulk pocket.

Last week’s long awaited Wannabes victory turned out to be a false dawn as Terry Boyle reports. Steve Cowin 33-81 Dave Pickersgill, an emphatic win for Pickersgill who played well and helped by some in-offs and bad run for Cowin. David Callister 45-62 Phil Joynes, Joynes got the start back and seemed to be in control but Callister raised his game, having a good chance on the colours he missed the blue which proved crucial. Harry Minor 48-54 Denis Boyle, a good close frame with Minor getting the pink to go ahead for the first time. There was a bout of safety on the black until Boyle slotted a long one down the cushion. Paul McKinstry 61-71 Marc Morley, a tight affair with Morley potting the black to nick it. Dave Corris 64-65 Terry Boyle, Corris was always ahead in this one and when potting the green went 25 up. Boyle fluked the required snooker and after a tense battle on each ball managed to get the black and steal the frame. To sum up, apart from the first frame PSM could easily have lost 4-1 but had the run of the balls all night. Moral of the story, it pays to say hello to the fairies….

Next week, league leaders Cue Zone Blinders play the Mob. The other ties are Musicians vs Peel Legion, Jacksons vs St Olaves, Malew vs Wannabes, PSM Legion v The Rockets and Hurricanes vs Newbys.