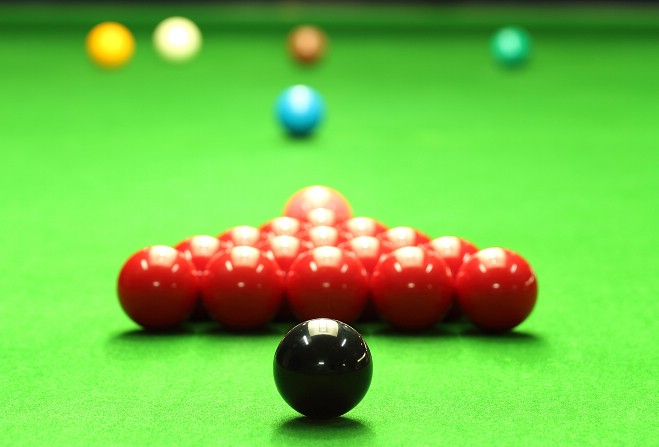 The Rockets have now won seven from eight this term and they also finished last season with seven straight wins, Graham Ashton reports. Matt Radley 44-55 Tony Pring, both were playing well, Pring potting good long balls and Radley not missing much. Pring taking pink and black to steal the frame. Marek Kenny 113-51 David Quayle, just an amazing frame of constant fouls! Early on, all of the colours ended up in baulk, Kenny struggling to find form was assisted by his opponent who gave away 54 points in fouls, some by Kenny’s snookers but most by pure bad luck. A good 22 clearance by Kenny finished it off. Graham Ashton 72-56 Eric Drinkwater, Ashton was straight in with 16 after the break-off and more teen breaks to close on Drinkwater’s start. Drinkwater had good longs reds but alas no colours. The brown was notable for staying up for fifteen minutes, ending up behind the pink, four inches from the middle pocket allowing Drinkwater to lay a great snooker which yielded a foul. But in the end Ashton took blue, pink and black to win. Doug Kinrade 60-39 Mark Quinn, little to choose between them, Kinrade just making more from his opportunities. However, he missed a trade mark sitter of a black over the middle pocket to extend his advantage. Postie fluked green and brown to close the gap but Kinrade came good with great blue and pink balls to win. Marc Bolton 70-41 Alec Oates, Oates soon realised he had his hands full with Bolton, who started very well with a couple of low teen breaks and some superb safety, Oates’ potting eluded him somewhat, and he failed to punish Bolton for the few mistakes he made. Bolton’s handicap is sure to come down if he replicates this form regularly.

With just one point between these in-form teams a close encounter was expected. This indeed materialised after the first two frames were shared, Johnny Myers 71-39 Peter Collister and Mikey Booth 31-58 Mike Doherty. The next two were much closer and again shared, Ste MacDonald 55-65 Vinny Dale and Simon Gardner 48-40 Vic Rigby. Gardner moves down to a 35 handicap from next week, the practice is paying off. The decider put Zain Abideen against Matt Dodd, the latter now playing off 35, his lowest ever with Abideen off of scratch. Dodd’s game went missing last week but according to his captain he would have beaten anyone on the island on the night, as this was probably his best performance ever! Consistent great potting with position as a stunned Abideen was left to battle in vain for seven snookers, final score 43-90.

Something of a change of fortune for Peel after last week, with the home team certainly having the run. Don Humphries 65-29 Tom Miller, some excellent safety, particularly from Miller, repeatedly leaving Humphries nailed to the top cushion. Humphries got lucky with a couple of leaves where Miller was left amongst the reds but none went. With black and pink safe, the highest break after the 14th red was potted was just 6! Miller, who started 28 behind was now 30 in arrears. He got the final red with green, yellow and green but missed a tricky brown, Humphries took brown, blue and pink to wrap it up. Barton Beaumont 96-48 Peter Crellin, chasing a 63 start, Crellin had already had a small break and then looked set for a big one before an ugly kick on a pink ruined things. Beaumont took a couple of reds with nice blues and suddenly it was snookers required. Crellin gave it a go but it wasn’t his night as a confident Beaumont put it completely out of reach. Mike Crook 59-40 Lee Hunt, last time these two met it ended 123-7, but when Hunt, going for a doubled brown to reach 20, saw it cannon in off the white, revenge looked on the cards. However, a strong finish on the colours saw Crook win with the pink. John Kelly 62-48 Steve Oates, an outrageous fluked brown from Kelly stirred Oates into action, and two nice teen breaks put him 11 up on the colours. A long battle ensued on the blue with either player needing two of the remaining balls. After plenty of half chances it was Kelly who eventually took blue and pink. Geoff Hall vs Steve Finnegan was the final frame, Finn still had pride to play for and a possible handicap cut to scratch should he have won. Although he fought back from 31 behind with three reds left it was Hall who was steady throughout who took brown and blue for the win 48-36 and seal a big 5-0.

PSM have a poor record at St Olaves and this was another fine home win, described as a ‘hammering’ by the PSM captain Terry Boyle. Paul Smyth reports. Darrell Thacker 78-31 Marc Morley, Thacker got in early with the week’s best break of 47, restricting Morley to a few pots, Thacker potted a few good long shots to pull away and win on the colours. Paul Smyth 59-49 Phil Joynes, Smyth chasing a 21 start was away well, and Joynes missed a few early chances. He pushed on with a 21 break, then Joynes had a few great pots in the lower colours, but missed a difficult pink, leaving it hanging for Smyth. Adam Blake 62-22 Dave Pickersgill, Blake started well with two small breaks. He then had a couple of flukes but also achieved his personal best league break of 18 to push ahead. Pickersgill played a few good safeties but couldn’t close the gap. Dave Kelly 22-48 Matthew Astill, an out of sorts Kelly missed a few chances in this scratch match, Astill settled better with some good long single pots and a colour here and there. Kelly had forgotten his safety boots and left Astill chance after chance helping him close out an easy win. James Kerr 107-54 Terry Boyle, Boyle started well with a couple of long reds, but it was Kerr who was to score more consistently as the frame went on. After a couple of unfortunate fouls from Boyle, Kerr had a 21 break and then a 25 clearance for the win.

The Reprobates twice came from behind at Finch Hill to continue their pattern of finishing matches strongly, and keep Jacksons winless from 9 games this season, Dollin Mercer reports. Alex Sinclair started well for the visitors, consistently out-potting resident MHK Rob Callister whose handicap rises to 28 as a result. Chris Killey restored parity for the Reprobates with his first ever frame win in competitive snooker, beating Paul Kell in a scratch game which included some brilliant single ball potting. The frame finished in dramatic circumstances when Killey tried to play the pink from the black cushion down the table to keep it safe, only to see it drop into a middle pocket on its way. His handicap rises to 63 despite the win. Jacksons went ahead again when Lee Gale defeated Danny Russett with a series of small breaks and never really looked in much trouble. The tail end of the Reprobates’ batting order did what it usually does this season though, with convincing wins for in-form men Paul Tangeman and Rhys Moore over Tony Dhadwal and Kam Virk respectively. That frame puts Tangeman back to the top of the individual league standings on 7 wins from 7, whilst Moore is also inside the top 10 on 6 wins from 8. Frame scores, Rob Callister 35-59 Alex Sinclair, Chris Killey 41-25 Paul Kell, Danny Russett 48-71 Lee Gale, Paul Tangeman 50-22 Tony Dhadwal and Rhys Moore 57-30 Kam Virk.

DSB Wannabes 1-4 The Hurricanes  Just a second win for the Hurricanes, taking this basement battle, Paul Smith reports. Steve Cowin 86-107 Jamie Wilson, Wilson made short work of the 63 start he was giving, helped by breaks of 27 and 23 and found himself in front with reds remaining and he closed the frame out soon afterwards to put the Hurricanes 1-0 up. Paul McKinstry 40-49 Darran Creer, a rare occurrence for Creer actually having to give a start. Both players potted some good single balls but couldn't follow up with many colours. Coming to the final colours McKinstry had a slight lead, but the frame inevitably ended up on the black. Both players had chances, but the frame went to Creer after his opponent went in off. Dave Corris 69-38 Shaun Roberts, Corris potted superbly throughout preventing Roberts getting any kind of foothold in the game. Although he potted some good balls with colours, it wasn't enough to threaten the 28 start he gave away and Corris ran out a comfortable winner. Fred Corris 83-89 Paul Smith, none of the Hurricanes have a good record against Corris and after the latter stroked in a 20 break mid frame to add to his 56 start, it looked like normal service. However, needing the last 3 reds and all the colours, Smith replied with a 22 break. Brown, blue and pink followed before a prolonged battle of safety and missed pots on the black resulted in Corris leaving a fairly routine black to the middle, which Smith took for an unlikely victory. James Teare 62-104 Gary Conwell, some great potting from Conwell saw him nibble away at the 56 start. Teare potted one or two reds and narrowly missed some high value colours. These misses wouldn't make a difference to the result though as Conwell ran out a comfortable winner in the end. A win for the Hurricanes that sees them racing up the table to the heady heights of 4th from bottom.

The Blinders return next week with a home tie against Peel. The Hurricanes are at home to the new leaders the Rockets, and should give them a good test. Musicians will be chasing some starts playing Wannabes. The Mob vs Newbys, Malew vs St Olaves and PSM Legion vs Reprobates complete the fixtures.