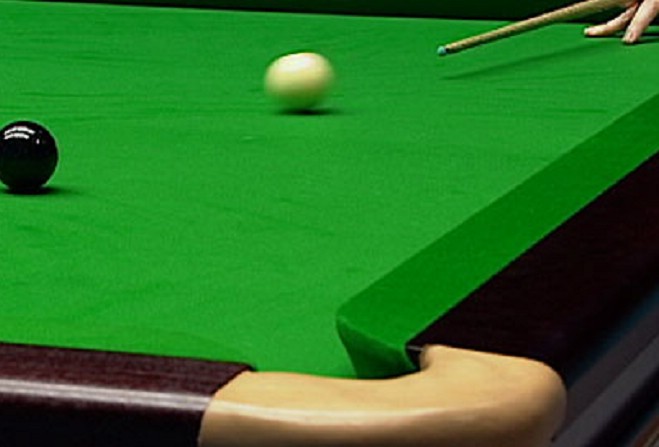 Two points separate four sides at the top of the league

Finch Hill Rockets suffered a rare defeat at the hands of the Hurricanes, but still head the way after week 10 of the Macs Builders Merchants snooker league.

Jamie Wilson 80-43 Marek Kenny, a few missed chances from Kenny but he made a good job of keeping Wilson at arms length for most of the frame, but a break of 23 got Wilson ahead and he never looked back closing the frame out at the start of the colours, although Kenny carried on for a while in search of snookers to no avail. Shaun Roberts 43-78 Jonny Hogg, a very attacking game, tit for tat in the early exchanges before Roberts took the lead with a 16 break, however this seemed to spark Hogg into life and he replied with some great safety and a 21 break to wrest control of the frame from Roberts. After that it was one way traffic with Hogg potting some superb long balls and following up with a colour where possible. Roberts needed snookers on the colours, managed to get back in the game, but was never really in control and Hogg completed his victory with the minimum of fuss. Paul Smith 43-76 Graham Ashton, with Ashton’s handicap down to 21, scratch player Smith probably fancied his chances, but it was the higher handicapper who was out of the blocks quickest to increase his lead to 35. A lot of safety play followed and Smith potted a few reds with colours to get within striking distance only to see Ashton pull away once again. Down to the colours and Smith needed two snookers on the brown after potting the green. This was when things got interesting. Ashton had already escaped two snookers earlier in the game but finally succumbed and missed one on the brown, the ball going in the pocket and leaving Smith needing only one snooker with the balls in a great place. With ball in hand, Smith inexplicably put the cue ball right behind brown instead of in the D and laid the snooker. Much to his surprise and the watching players amusement a foul was correctly called and he was now snookered himself and was back to needing two snookers. Smith then went in-off when going round the angles in search of snookers and immediately conceded. A deserved victory for Ashton who is obviously enjoying his new cue. Gary Conwell  51-24 John Spellman, two players who can make long potting look easy and Conwell didn’t disappoint in the early stages whereas Spellman struggled, Conwell hardly missing a long pot and leaving his opponent nothing. He soon built up a lead of almost 20, but a combination of him missing a few and Spellman eventually finding his potting boots meant he wasn’t getting over the line that easily. The fight went into the colours and with an excellent long green the momentum seemed to be with him, however it wasn’t to be and Conwell closed the frame out soon after. A good battle though. Steve Munk 70-34 Doug Kinrade, the way Munk started you wouldn’t have thought his last game was in April. In his customary position of anchorman and needing the frame for a team win he hardly missed a ball. Long pots were flying in from all over and one of them saw the white ball held to perfection for the next colour, a shot that a minus handicapper would have been proud of. Kinrade tried his best to get in the game, but a fairly straightforward missed black didn’t help his cause and although Munk’s onslaught abated somewhat towards the end of the frame he still needed snookers going into the colours. The handshake was soon forthcoming to end the quickest game of the night and give the Hurricanes a well deserved win over the league leaders. Details from Graham Ashton and Paul Smith.

Plenty of nail biting action at The Cue Zone with four frames in the balance, going to the pink or black.

Martin Rigg 45-48 Jim Caley, turned into a lottery at the end with both having goes at the black, before Caley claimed a good win. Scott Campion 68-54 Barton Beaumont, a couple of early fouls increased Beaumont’s lead to 29. A couple of teen breaks from Campion, which came from excellently taken mid range pots, brought him back into it. A close tussle ensued before Beaumont rifled home the final blue but left himself snookered on the pink. Not only did he miss the pink but left Campion in the perfect position to smash the pink in to seal Blinders first frame of the night. Josh Rigg 55-80 Don Humphries, was a close fight and a decent standard, Humphries needed a break of 24 to stay in it then pulled away in the end. Rigg fought for a couple of snookers with pink and black left, finally going in-off the pink and conceded. Calum Gardner 65-51 Geoff Hall, a couple of breaks from Gardner including a nice run of 24 pulled back the start. Hall missed a couple of dead easy pots but still could have forced re-spot with the final black, but Gardner rolled it in, a tricky shot along the top cushion to make the score 2-2. Brandon Forrester 58-47 John Kelly, the decider predictably went all the way too, and was an entertaining climax to the evening. Kelly accrued 26 points in fouls and both missed chances on the black before Kelly left it over a middle bag. Blinders still only beaten once this season.

Musicians are just one point adrift after their eighth win in nine.

Mike Doherty 69-38 Paul McKinstry, again Doc played a good all round game to pick up a fifth win in a row, all fairly convincingly. David McVeigh 64-33 Steve Cowin, not much in this before McVeigh went away with some good pots on the colours in his first appearance in two years. Vinny Dale 46-39 Harry Minor, a slow burner before nice pots on the final blue and pink from Minor levelled the scores. However, he missed the black a left it for the Musician’s captain to roll into the bottom corner. Vic Rigby 23-44 Dave Corris, dour stuff here with the first colour being potted on the final red. Corris took a blue with the final one and ground out the win on the colours. Matt Dodd 62-79 Fred Corris, Corris started very well extending his 28 start to 55 and looked like running away with it before Dodd found his range with a 23 break. More small breaks followed as Dodd completed his amazing fight back, even taking the lead. However an in-off the final pink left an easy pot for Corris to take another point. Details from Matt Dodd.

The highlight of this 8th vs 2nd tie, was perhaps seeing a frame won with just 33 points, a feat achieved by Lee Hunt in frame three, apparently his safety being ‘too good’ for Adam Dooley! Steve Finnegan went on early this week and was certainly more awake with breaks of 27 and 22 to take the first 68-33 against Mikey Booth. Peter Kirkham 63-86 Johnny Myers levelled matters before Lee Hunt 33-23 Adam Dooley, Steve Oates 84-33 Simon Gardner and Tom Miller, (33 break) 74-37 Zain Abideen put an end to the Mob’s bad run of results.

PSM are still looking for a win on their win on their refurbished table, Terry Boyle reports. Marc Morley 46-68 Ashley Howard, 70 handicapper Howard looked more like a 7 as he started very well. Morley came back strongly only to go in-off the pink which effectively ended the frame. Phil Joynes 43-53 Chris Killey, good game this with Killey just keeping in front until the colours. Joynes took yellow, green and brown but narrowly missed the blue which Killey potted to leave Joynes needing pink and black. Joynes missed the pink leaving it in the jaws and frame over. Dave Pickersgill 60-12 Danny Russett, Russett started well with two reds and blues but accidentally broke the pack open and Picketsgill took full advantage having a 21 break followed by an 18 and playing well, strolled to victory. Matty Astill 48-44 Paul Tangeman, the best frame of the night, nip and tuck all the way, both players potting well. Tangeman needing the pink to win went in-off, Astill missed the pink in the middle which Tangeman potted. After some good safety play on the black Tangeman got a double kiss and Astill took his opportunity well. Terry Boyle 43-76 Rhys Moore, too many single reds from Boyle who was chasing 35 from the start against the steady Moore. Needing all the colours Boyle went in-off the yellow and the Reprobates victory was confirmed, well played Rhys.

St Olaves poor start to the season seems a distant memory as they win again, this time at struggling Malew. The win, that leaves them just four points off the pace was wrapped up after the first three frames which ended, Jimmy Goodwin 53-63 Dave Kelly, Mark Quinn 60-73 Darrell Thacker, (20 break) and David Quayle 51-72 Adam Blake. All was not lost for the home team though as Tony Pring, who is back as a regular this season, ran away with his frame 102-32 against James Kerr and Alec Oates, in a somewhat closer affair 62-57 over Paul Smyth, (20 break) to rescue two points.

Tony Pring and Calum Gardner both won this week and leap to the top of the individual league with eight wins. The high break league sees Tom Miller on 15 points with Darryl Hill on 12.5 and James Kerr 11.

The last week of fixtures before the festive break includes a top of the table, derby clash at Finch Hill, Rockets vs Musicians.

The other matches are Wannabes vs The Mob, Reprobates vs Malew, Jacksons vs PSM Legion, Newbys vs Blinders and St Olaves vs The Hurricanes.