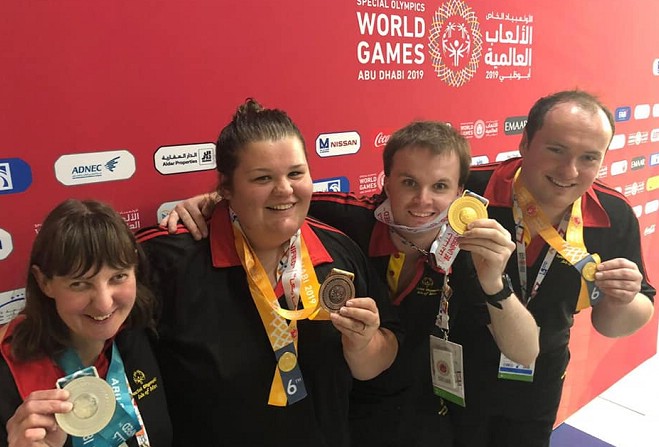 Team Isle of Man athletes show off their medals

The Isle of Man's Special Olympics team is preparing to arrive back on home soil following their participation at the World Summer Games in Abu Dhabi.

They're set to touch down at Ronaldsway just after 9pm on Friday (22 March), with members of the public urged to go along and give the athletes a hero's welcome.

A final tally of 17 medals was won by the Manx athletes, including golds for shot putter Duncan Watterson, Zoe Lambie in the badminton singles and swimmer Edgar Denyer in the 100m freestyle.

Rebecca Maller became a double-bronze medallist in the gymnastics and there were also top three finishes in bocce and ten-pin bowling.

Speaking live from Abu Dhabi, coach Dave Hudson told Manx Radio Sport the event has been a fantastic experience for all involved: