Sport Aid Academy gearing up for 2020 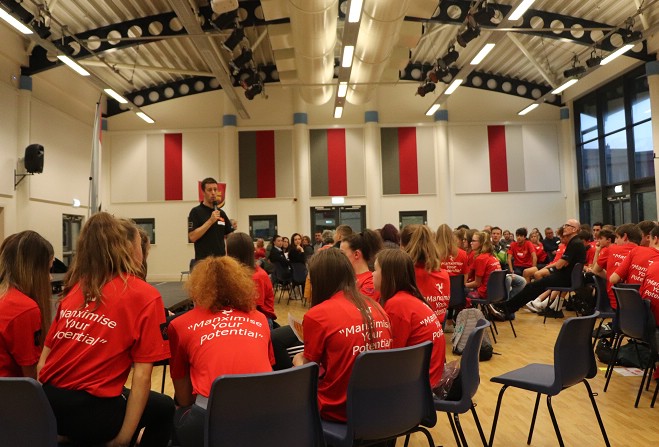 Paul Jones addresses the audience at one of the previous sessions

Next set of sessions to start on Friday

The Isle of Man Sport Aid Academy is looking forward to another set of sessions, which resume on Friday this week following a winter break.

In its fifth year, the Academy has seen 82 young people sign up for the programme in 2019 after being nominated by local sporting governing bodies and their secondary schools.

So far, there have been six workshops and one physical testing session since the programme’s launch at the end of September.

Organisers say attendance has been very promising so far, with an average of more than 60 young people and their parents at each session.

Workshop themes have included 'Understanding the Steps Towards Excellence', 'The Teenage Brain', and 'Planning for Performance'.

Isle of Man Sport Athlete Development Adviser Paul Jones has led each session, supported by a team of facilitators which includes a number of former international athletes to guide and encourage the young participants.

There will be four more events through to the end of the April, after which the Academy will close over the summer break before reopening in autumn for the second year.

The themes for the remainder of the programme include 'Diet and Nutrition', 'Rest and Recovery', and an 'Introduction to Sports Psychology'.