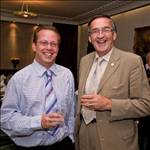 Nominations for the 2011 Isle of Man Bank Sport Awards will be revealed at lunchtime on Monday, February 20.

There are nine main categories and the winners will be announced at a gala ceremony at the Villa Marina on Thursday, March 29.

The guest of honour will be former double World Superbike Champion James Toseland.

Isle of Man Sport chairman Geoff Karran says picking the nominees this time around has been particularly difficult (listen to audio file below):