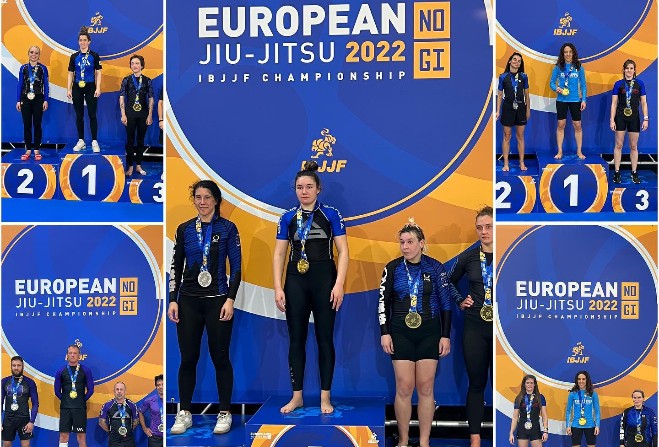 History was made at the weekend for the Isle of Man in the world of Jui-Jitsu.

Gracie Barra's Adult Competition Squad recently competed in one of the highest-level tournaments in the sport: The IBJJF European Championship.

Alanna Pritchard became the Isle of Man’s first ever IBJJF European Champion winning Gold in her division; she adds this to her British Champion title she gained earlier this year.

Saturday saw the rest of the Squad compete.

Unfortunately, it wasn't Myles Joughin's day - he lost out by one point in his first round in what was a highly competitive bracket.

Catherine Moor then came away with a Silver in her division after beating a rival from Roger Gracie Academy in the semi-finals.

Hayley Curtis faced the eventual winner in her semi-final of her weight division, she lost out in what was a close match and ultimately led to her taking Bronze. However, she then entered the open weight category, which saw her up against an opponent 20kg heavier in the semi-final. It was here that her hunger to win really showed leading to victory in that match and her ultimately taking home a well-earned Silver medal.

The final division match for the Squad was Colin Everden - one of the lead coaches at the Academy. Colin, who's known for his takedowns and takedown defence, put this into good practice in the quarter finals of his division which saw him win on points after completing one of the best throws of the tournament! This secured a Bronze for Colin.

Head Coach Conrad Roberts who joined the Squad for the 3-day tournament in Italy said:

“For anyone who has been following our progress in 2022 you will have known that the IBJJF European Championships were what we were working towards after stepping up a gear at numerous points throughout the year. I am incredibly happy with the results which are nothing short of astounding and are testament to the Squad’s hard work and commitment but also the Coaching team including Mark Franklin, Callum Perry and Rob Matthews who have helped the competitors a lot with this one along with S&C programming from Dan Bonett and nutrition from Gianni Fabrizio which has become a staple of the training camps which I devise for the Squad. A big thank you goes out to all the students and supporters back home in the Isle of Man who have shown such encouragement whilst we were here but also in the lead up to the tournament”.

The team would also like to thank The Crown Group Limited for their kind sponsorship for this trip and are keen to hear from any sponsors who may like to assist in future.