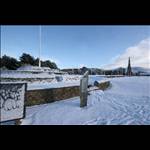 The Big Freeze is affecting sport.

Wednesday evening's opening matches in the Isle of Man Table Tennis Association's Spring League at the National Sports Centre have been postponed to next week.

The Northern Athletics circuit training at Ramsey Grammar School has been cancelled and tomorrow's Ramsey Firemens Run has been postponed until next Thursday.

Tuesday night's Southern Darts League Men's Top Half Cup match between Ronaldsway Social Club and the Haven was postponed and will now be played on Thursday 14th January.

A large party from Manx Harriers is due to travel to the Lancashire Cross Country Championships in Blackburn on Saturday.

Heavy snow in the region is causing problems and the course at Witton Park will be inspected on Thursday to see if the meeting can go ahead.

Plans are being put in place ahead of the weekend's Rugby fixtures. Douglas are due to host Ashton on Mersey in South Lancashire & Cheshire Division Two - if the pitch at Port-e-Chee is frozen, the game will be switched to Ramsey.

Vagabonds and Ramsey are due to travel off-island to Dukinfield and Holmes Chapel respectively - no word yet about conditions at the venues.

Sunday's Southern Motorcycle Club Enduro Championship at Dalby Mountain has been postponed after discussion with the Met Office and other authorities. It will now take place on Sunday 14th February.

The Whiskey Tasting Evening at the Sulby Glen Hotel in aid of injured Travelling Marshal John McBride has been cancelled due to the bad weather forecast for the weekend. Anyone with tickets is asked to contact the pub on 897240 for further details.