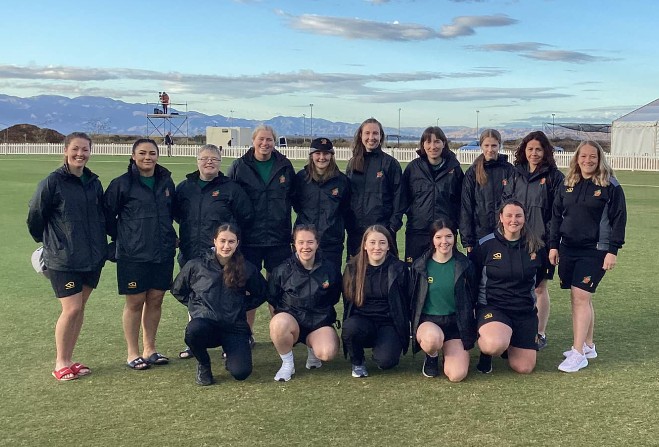 There was success for the Isle of Man's first ever Women's National team in Spain with Lucy Barnett taking player of the match in two games.

Competing in the T20I Multi-Nation Tournament at Desert Springs, the Manx side beat Norway by 10 wickets.

An excellent display in the field and with the ball saw Norway bowled out.

Kim hit excellently through the leg side and punished anything short and Lucy playing some fantastic drives.

Player of the Match (voted by the umpires) - Lucy Barnett

Lucy Barnett got the Isle of Man off to a quick start with 24 (18 balls) with some excellent drives.

Alanya Thorpe 20 (15 balls) and Catherine Perry 14 not out finished the innings off brilliantly to push the Isle of Man to 132-7.

A partnership by the Spanish left and right handers took the game away from the Isle of Man.

Game three was against the Italian Women’s National Team.

Captain Clare Crowe won the toss and chose to bat.

A fantastic innings from Lucy Barnett held the IOM batting performance together to finish on 102.

Lucy made 64 and was out in the final over, the innings was made up of a number of glorious drives through the infield and over the top alongside some very positive running.

A very disciplined display from the Italian bowlers made it very difficult for the IOM batters to push on to a big score.

A much-improved display in the field and some tight bowling led by Alanya Thorpe 2-10 made the Italian batters work hard for their runs.

The other wicket takers were Danni Murphy and Jo Hicks.

Player of the Match - Lucy Barnett

The Isle of Man finished their debut tournament against Sweden, who, despite a valiant performance from the Manx side, proved to be too strong on the day, taking the win in the last match of the event.

IOM Cricket has since released a statement about the experience:

The four games at Desert Springs have seen lots of positives including our first T20 international win versus Norway by 10 wickets. The games versus Spain and Italy saw the IOM players really push two internationally ranked teams. Congratulations to Italy on their pentangular series victory.

Clare Crowe as captain led the team from the front and I’m sure will have learnt a lot. A special mention to Finn Martin who unfortunately injured her ankle on the first day and wasn’t able to make her international debut but has been a tremendous support for the players throughout the tournament.

The girls have shown a huge amount progress and resilience throughout the tournament particularly as seven of the players only started playing cricket this summer in the IOM women’s soft ball league.

It has been great for the players to spend time and get to know fellow female cricketers from across Europe who fly the flag for their respective countries. Camaraderie has really built up between the five European cricketing nations.

Training will begin again for the squad after Christmas where the players will look to continue their progress and prepare for their next T20 internationals.

You can watch the matches back on the CricketEspana YouTube channel