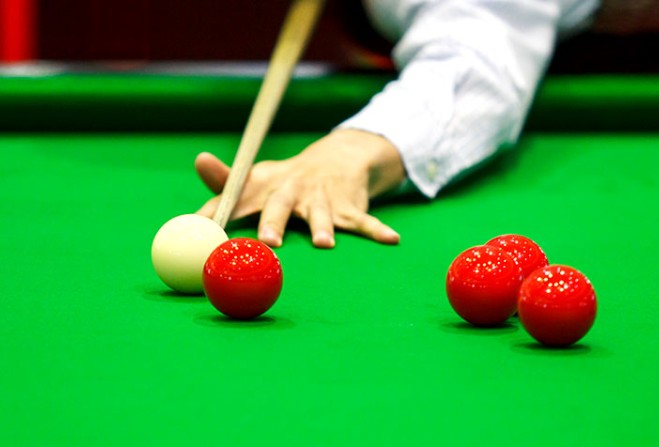 The first two frames were shared, Brendan Clague 75-23 Nick Stephens and Paul Russell 31-65 Josh Rigg. Clague continued his excellent unbeaten run, with Stephens not getting a look in for the first half. In frame 2, the returning Josh Rigg controlled his frame from the start for a first win in over a year. David Kelly 107-92 Darryl Hill, starting 70 adrift Hill made no inroads until mid-frame when he knocked in a 43 break, missing a black with two reds left. Kelly followed with a red and black of his own, then later potted yellow to brown to leave Hill needing two snookers. Aided by an in-off and a snooker Hill accrued the penalty points required to win but missed an attempt on the blue trying to get around for the pink. Kelly sunk the blue and again two snookers were required by Hill. Kelly yet again went in-off and failed to escape a snooker and it was game on again. However, catching a long pink far too thick, the pink and white travelled back down the table together towards the corner pocket to leave a simple tap in for Kelly, a frame he had to win three times! Alan Heath 22-71 Scott Campion, frame 4 saw Scott Campion play hopefully his last frame off 42 for a long time as an early 15 break gave him a lead which he just extended throughout the frame. The decider, between Martin Rigg and Calum Gardner saw the latter strike a nice 36 break to make up the 21 difference. A spirited comeback from Rigg followed but it wasn't to be as Gardner did enough to bag the win, 36-84.

James Goodwin 71-37 Mike Reddington, both players struggled to find pots. Goodwin tried to throw it away with the cue ball disappearing several times and a couple of miscues. Somehow, he managed to keep his nose in front to win. Mark Quinn 58-52 Paul Kell, as in the first frame it was hard to pick a winner. Quinn potted a few good balls with his shooting from the hip style and so did Kell. When it came down to the colours it was Kell who only needed the blue to leave Quinn needing snookers. With pink and black hanging over pockets, Kell tried to pot the blue into the same pocket that the pink was close to, he missed it and left it for a grateful Quinn. Quinn then solidly potted pink to leave himself an easy black, a late delivery by Postie. Tony Pring 55-29 Alex Sinclair, early on Sinclair had the upper hand with some good pots and Pring was making mistakes, but somehow Pring managed to crawl over the line. Tony Cubbon 75-37 Kam Kirk, always looked like a Cubbon win and his potting ability saw him through despite Virk's best efforts. Alec Oates 35-70 Dave Welsh, it was always one step forward and two back for Oates. Some might say he was unlucky to go in-off a number of times, but in reality, it was bad play on his behalf. Taking nothing away from Oates's opponent, he deserved the win. With only pink and black left and needing a number of snookers, Oates carried on despite some looks of non-belief from the spectators. He managed to get a good one, leaving a little distance between black and pink which were sitting in the middle of the table. Welsh played off the side cushion, just missing the pink on the way up, the cue ball went around the yellow pocket and hit the pink on the way down! That was enough for Oates.

Terry Boyle 53-54 John Spellman, a hard-fought match with Boyle potting off the lampshades to make the early running and Spellman battling hard to stay in contention. Both played well but it was Boyle who was 21 ahead going into the colours before Spellman found his potting boots. He took all the colours in two visits. His tricky cut black along the top cushion with the rest was brilliant, most watching were expecting a safety shot. Phil Joynes 58-65 Sean Murphy, giving 21 start, Joynes had more than his fair share of bad luck at the start. Murphy capitalised looking comfortable with great cueing and solid potting. But “never say die” Joynes fought back and turned the deficit into a 7-point lead with only the black left. A careless safety shot gifted Murphy the final ball to demand a re-spotted black. After a short safety battle, it was Murphy’s Law that triumphed in the end of an entertaining frame. Dave Pickersgill 83-0 Jonny Hogg, Pickersgill started the frame like a man determined to bring home the bacon. An unusually tentative Hogg made ham of some early easy reds which handed Pickersgill’s treats which he snuffled up. Pickersgill continued the grilling by scoring freely at every visit. Running out an easy winner, Pickersgill roasted Hogg, but no doubt JH will be back with a vengeance. Matthew Astill 57-29 Marek Kenny, a slow start with both players struggling to remember where the pockets were. Early on, single reds aplenty were scored in a game that certainly lacked anything to Christmas cheer about. But it was Astill that broke the stalemate with a tidy 16 break, unlucky not to score higher. A frustrated Kenny was then handed a chance to close the gap but was unable to capitalise. Astill stepped up to the plate and made a 14 break with some superb long shots to move the game out of reach of a despondent Kenny. Marc Morley 68-42 Marc Bolton, Morley gave a 14 start but seemed eager to close the gap early with determined potting. Bolton coolly responded with strong safety play, rattling many pockets in addition. Both players then started to freely pot, it was Morley that opened up a small lead with a 15 break. Mistakes crept in with back-to-back fouls as the pressure mounted, however it was Morley that stopped the rot with yellow, green, brown, blue and pink for game and match.

The Mob were conceding hefty starts in all five frames but still took maximum points. Tom Miller started off the evening in spectacular style, hitting the highest break of the season so far with 78, breaking down on a tricky fourth last red to the middle. He then mopped up with a 25 clearance, Miller 128-71 David Callister. Wannabes had their chances but lost the next three on pink balls, Steve Finnegan 68-60 Jason Campbell, Lee Hunt 86-78 Steve Cowin and Peter Kirkham (23) 99-87 Paul McKinstry. There was a nice early 30 break from Peter Crellin in the last against Dave Corris. Crellin then followed up with an even better 36 which ended with the inevitable cry of, ‘butchered’, Crellin 84-60 Corris.

Mike Doherty 50-40 Jim Caley, Caley nearly nicked this with a fortuitous green followed by brown and blue but landed on the cushion for a horrible looking cut on the pink. He missed the pink so badly, he only hit it on the way back. Doc took a well cued pink off the cushion, across to the opposite middle and later the black for frame. Martin Rigby 66-44 Don Humphries, solid stuff from Rigby on his league debut, holding his 21 start throughout. A late fightback from Humphries on the early colours came to nothing after Rigby finished with blue and pink. Dave Hanlon 68-51 Mike Crook, an early couple of reds and blacks boded well for Crook but it soon went pear-shaped for him. Hanlon wasn’t at his best either but stuck in some hard, solid balls to build up a good lead on the colours. A nice snooker and a few jammy ones gave Crook hope before Hanlon stepped in with blue and pink. Zain Abideen 27-56 Geoff Hall, a good win for Hall with only a 14 start over Zain who not so long ago was off scratch. Hall made numerous mid-range pots as Zain misfired. Vic Rigby 58-72 John Kelly, Rigby extended to 32 up with 9 reds left before Kelly got a nice run of 19. A couple of surprise fouls helped Kelly further as Rigby went into uber safety mode. Kelly then missed a simple looking brown, effectively for the frame. Rigby replied with a massive fluke on the blue and could easily have taken it to the black with a simple looking pink, but went in-off. Kelly sunk the pink to round off proceedings at 11.40pm. The match on the table opposite had been finished over an hour, having started 30 minutes later!