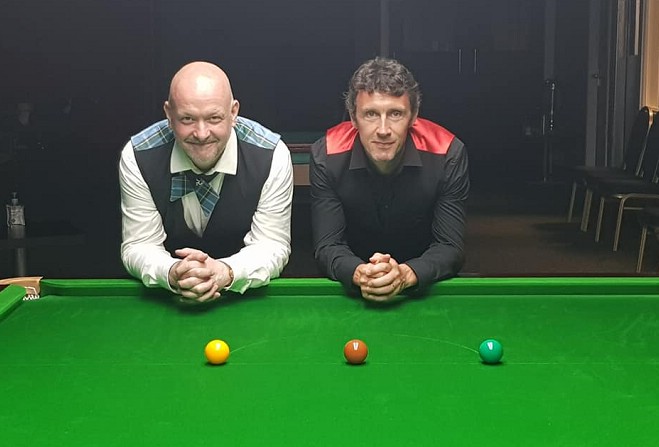 They defeated Finch Hill Rockets 3-1 in the best of five frame play-off title decider. The players from both teams provided some excellent snooker with all frames going to the colours. Frame one had Paul Smyth up against Marek Kenny of the Rockets, third and second respectively in the individual rankings with Kenny receiving a 28 start. Smyth had the better of the early exchanges and with his usual solid potting soon levelled the scores. Kenny was unable to string much together in the tense atmosphere but some good safety kept him in contention with the score 51-45 to Smyth with just three balls remaining. The decisive moment came as Smyth, playing a ‘shot to nothing’ on the blue to the corner, wasn't close but the blue disappeared into the opposite middle. This left a tricky cut back pink into the green pocket which he slotted away nicely to put St Olaves 1-0 up.

Next up were Darrell Thacker for St Olaves and Graham Ashton, the latter with a 14 advantage. Thacker, winner of the most frames over the season hit some blistering reds but colours weren't easy to come by. Ashton, keeping it tight was mainly relying on fouls from his opponent to keep his score ticking over. When Thacker potted but the final red with a yellow the score was 32-27 in his favour. Blue and pink were making a big target for snookers on the side cushion and Ashton picked up another four points. Ashton eventually got his first colour of the frame, the final green but Thacker powered the brown in and lined up a snooker attempt on the blue. He missed the thin snick required and instead caught the pink to put Ashton back ahead 38-40. Ashton had his chances on the blue but eventually left it for Thacker who then doubled the pink into the middle for a hard earned 49-40 win.

With St Olaves 2-0 up the Rockets needed to win the remaining three frames and their fate lie in the hands of Jonny Hogg, who received a 28 start from James Kerr of St Olaves. Kerr had a bright start but errors crept into his game and with Hogg mainly picking off reds with blues built up his lead to 16-53 with five reds left. Kerr dragged it back to 33-56 with two reds remaining but a lovely mid range red from Hogg, holding for blue made it 33-62. A snooker, resulting in a six point foul from Kerr put Hogg 35 ahead with 35 on. Kerr then profited with a couple of snookers and with the final red and blue it was 47-68. Kerr was unlucky to go in off the yellow but Hogg held his nerve to put away frame ball green into its own pocket. Kerr battled in vain for the snooker required and the concession came at 53-86 and the Rockets were still alive.

The fourth frame saw St Olaves legend Sean Corkish and Doug Kinrade in a repeat from last month’s league encounter where Kinrade ran out a 68-102 winner. Kinrade soon added to his 63 start with a break of 14 to go 77 ahead. Corkish, unflustered hit back with a small break but then missed a black off its spot. Kinrade then missed a simple looking red and Corkish made the score 29-77 with eight reds left. With the reds spread Corkish was left in prime position and knocked in a 30 break and by the time just one red was left the score was 71-78 in favour of Kinrade. Kinrade made a difficult last red with the rest but Corkish won fights over yellow and green to make it 76-79. Obstructed by the pink, Kinrade cut in a long brown then Corkish with the blue closed it to 81-83. With first shot at the pink Corkish nearly potted it in the corner and middle. Kinrade, just needing one ball had a go at the double-cum-treble shot but to no avail. He was to get one more half chance using the rest but left the pink hanging over the yellow bag. Corkish knocked this in screwing off two cushions to land perfectly on the black which a player of his calibre wasn't going to miss for frame, match and league title 94-83 to St Olaves ‘A’.

The Rockets had defeated St Olaves both times in the regular season and only lost 5 times in 24 matches as opposed to 8 defeats for the Ramsey outfit.