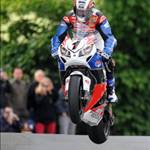 The Superbike, Superstock, Supersport and Senior classes were significantly over-subscribed while the Supertwins or Lightweight TT has attracted over 70 riders in only its second year.

Numbers for the TT Zero also look promising with new participants expressing an interest in competing.

And the Sidecar class has attracted its biggest field since 2007 with over 60 crews registered bolstered by a increase of several newcomers.

Several top name competitors will be looking for their maiden victory around the Mountain Course - Guy Martin, Conor Cummins, James Hillier, William Dunlop, Dan Kneen and Dan Stewart to name but a few.

Isle of Man TT legend Dave Molyneux will be back looking to add to his record tally of 16 race wins with Patrick Farrance as passenger once again.

They are likely to be pushed hard by the likes of Tim Reeves and Dan Sayle and the Birchall brothers Tom and Ben.

John Holden and Andy Winkle will again try and break Manx stranglehold on the class - their triumph in 2011 is the only one without Manx involvement in the winning crew since 2003.