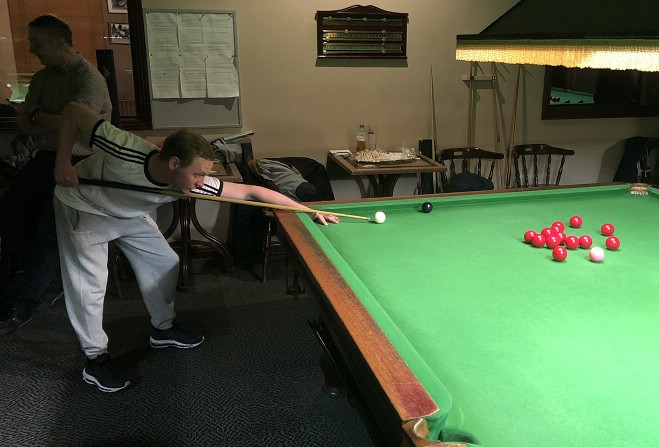 A record-breaking week for Manx snooker?

Week two of the 2018/19 Macs Builders Merchants snooker league saw Peel Legion canter to the top of the table, after a comprehensive whitewash win away at Port St Mary Legion.

Dave Pickersgill unfortunately lost out in his second black-ball-game in two weeks, this time to Don Humphries, and that set the tone for the match – comfortable victories for Geoff Hall, Mike Crook, Kyle Darby and John Kelly were to follow, meaning it was a happy drive home for the westerners.

The individual performance of the week goes to Jamie Wilson, however, who never really looked like missing as he split the pack of reds early en route to a slick break of 46.

Dollin Mercer and Darryl Hill were the victors for the ‘Young Guns’, in the team’s first ever match away from home, with Hill registering a break of 20 as he defeated fellow Home Internationals player Zain Abideen.

Also at Douglas Snooker Club was the first Ballaquayle Road derby of the season, with the ‘Wannabes’ losing 3-2 to the ‘Hurricanes’.

Nigel Kermode, Chris Murphy and Chris Dagnall registered the wins for the team IoMBSA Chairman Ken Kinrade is tipping for the title this season, whilst Fred and Dave Corris grabbed valuable points for the ‘Wannabes’.

St Olave’s were on excellent scoring form as they enjoyed a successful trip to Ballasalla – there were breaks of 38 for Dan Crawley, 25 for James Kerr and 23 for Sean Corkish as they all won, with Tony Pring and Alec Oates stemming the tide for Malew 2.

At Finch Hill, the ‘Musicians’ made it two wins from two with a 4-1 win in another home derby against the ‘Mob’.

It took a break of 30 from Peter Crellin in the final frame to avoid a second whitewash of the night, after what can only be described as one-way traffic for the majority of the evening.

Saving the best until last though, it’s thought there could have been a Manx record broken on the adjacent table, as Finch Hill ‘Rockets’ welcomed Malew 1.

With a combined age of over 177 years, the two most experienced players in Manx Snooker faced off as ‘Rocket’ Ron Grogan defeated Roy Gelling by 56 points to 48.

Marek Kenny and Graham Ashton also won to secure a tight victory for the ‘Rockets’, with Dennis Quaye and Nick Crouchman sealing more convincing frame wins to take two points for the visitors.