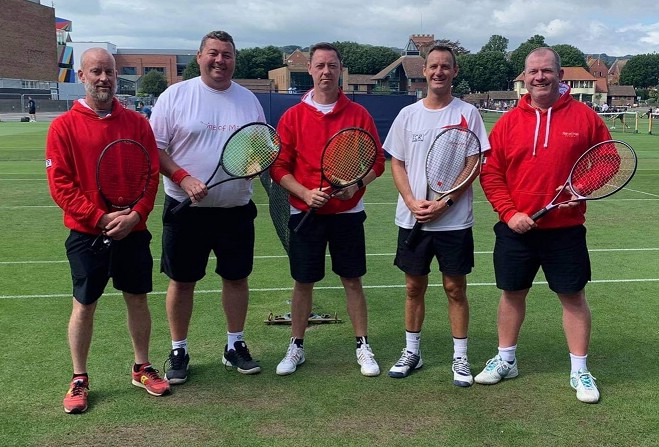 After a year out, the Isle of Man 35 & Over tennis team travelled to Eastbourne to play on the famous Devonshire Park grass courts.

The team of five made up of Neil Ronan (captain), Rob Mason, Rob Comber, Nigel Hunter and Jos Woolford were in for a tough time with some large counties in their group.

Day one saw the team take on Cumbria in a fixture that has become quite regular in recent years usually promises to be quite a tight. The match was played on courts at Moira House, used as practice courts for the ATP and WTA when playing at Devonshire Park. The courts were in perfect condition.

First on court was team debutante Jos Woolford. Jos took on the very handy David Herd who was playing at 2nd singles having played previous years at No. 1. Woolford gave a good account of himself but Herd proved too strong taking a 6-1, 6-3 victory.

Next up was Rob Comber taking on the very experienced Gary Payton. This proved to be a very long and tight match with a break of serve in each set proving decisive. Unfortunately it was not in the Isle of Man’s favour and Payton ran out the winner 6-4, 6-4.

Next up was the first of three doubles.

Rob Mason and Neil Ronan taking on Andrew Tweedie and newbie Ben Davidson. This one went to a third set championship tie break with the I.O.M. pair taking the win 3-6, 6-4, 10-5.

The second doubles saw Ronan team up with Nigel Hunter to take on the two Cumbria singles players Herd & Payton. This again was an epic match with the I.O.M. pair losing out by the narrowest of margins 3-6, 6-4, 9-11.

In fading light, Woolford and Comber went on court to play Tweedie and Davidson. It became apparent very quickly that the light and moisture on the court would cause problems. At six-all it was decided that the best way would be to settle the rubber with a championship tie break which resulted in a 10-8 win for the Isle of Man.

This gave the narrowest of victories to Cumbria 3-2.

Day two and the team took on Somerset who they had not met previously. Having lost on day one to their close neighbours, Avon, Somerset were out to get the campaign going.

Woolford, again playing at number two singles, started well but the Somerset player Peter Belfield just had the edge all the way through winning 7-5, 6-4. Ronan, filling in at number one singles, had a real tough time against a high quality opponent in Richard Stock. Stock barely put a foot wrong running out the victor 6-1, 6-0.

Due to weather delays the organisers changed the doubles to a fast four format.

Hunter and Comber combined in the first doubles taking a very narrow 3-4, 4-0, 10-7 victory against Neil Kanka and Graeme Tucker. Unfortunately, this turned out to be the only victory with Mason and Ronan unable to do the same against Kanka and Tucker, losing 2-4, 0-4 and Comber and Hunter losing out 3-4, 2-4 against Belfield and Stock.

Day three and the Isle of Man team had their toughest fixture of the three taking on table topping Avon.

Mason played at second singles filling in for the injured Woolford. A very tough match against Avon captain Josh White ended in a 1-6, 1-6 loss.

Comber was next up at first singles against a quality player in David Perren who won 6-2, 6-0.

It was then down to the doubles pairing of Ronan and Hunter to keep the match alive, but the Avon pair of Jonathan Caines and Guy Thomas proved why their team was top of the Division. Ronan and Hunter gave it everything they had on the final day of a tough weekend but it wasn’t to be, losing out 3-6, 4-6. This gave the Avon team an unassailable lead meaning the last two doubles would not be played.

Report by Tennis Isle of Man.