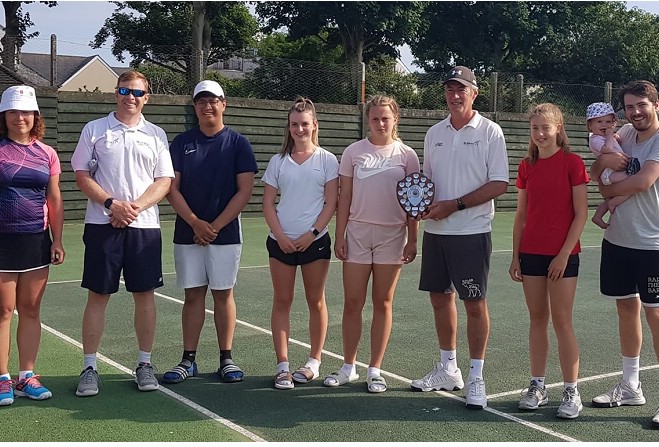 Castletown, Albany, and Ramsey went head-to-head at the weekend to battle it out in the annual Triangular Todmorden Shield.

On the women’s side, unfortunately, Ramsey could only field one pair. However, Edith Van Genuchten and Helen Brooks fought hard and gained the team six valuable points. The two Castletown pairs of Justine Torry and Lucy Kerr and Nic Skillicorn and Amanda Munro picked up a respectable twenty eight points between them. The Albany Women, Charlotte Clarke, Michaela Duchonova, Aalish Kelly and Sarah Long proved too strong though, not dropping a single game between them, coming out with the maximum forty eight points.

In the Men’s, Ramsey’s Sean Drewry and Orry Farnworth battled hard to keep their team in contention and came out with the maximum twenty four points. Ramsey’s Neri Gricevicius and Jon Gower Jackson didn't fair quite so well, ending up on seven points. Castletown's pairings of Rob Mason and Neil Ronan and Jonny Weir and Jos Woolford faired similarly to the Castletown Women coming out with a total of twenty five points. The Albany Men held their own though, with Ian Watson and Gareth Roome gaining the team a valuable eighteen points and Marc Chinn and AJ Go dropping just one game taking twenty three points.

With all the scores added up it left Ramsey on 37, Castletown on 53 and Albany on 89.

Next year the Todmorden Shield will be hosted by Ramsey.