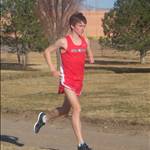 Keith Gerrard smashed the Manx record for the Great North Run at the weekend.

The 24-year-old clipped more than three minutes off Steve Kelly's record of 1:06.53, which stood for 33 years.

The half-marathon race between Newcastle and South Shields is one of the biggest running competitions in the world, with upwards of 50,000 entrants.

The men's race was won by Kenyan Martin Mathathi in a time of 58:56, Gerrard was tenth overall and the first British finisher.

Lucy Wangui made it a double for Kenya by winning the women's race in 1:07.06.