On Air The Morning Show Marc Tyley | 9:30am - Noon
Luke Combs - Lovin' On You Download 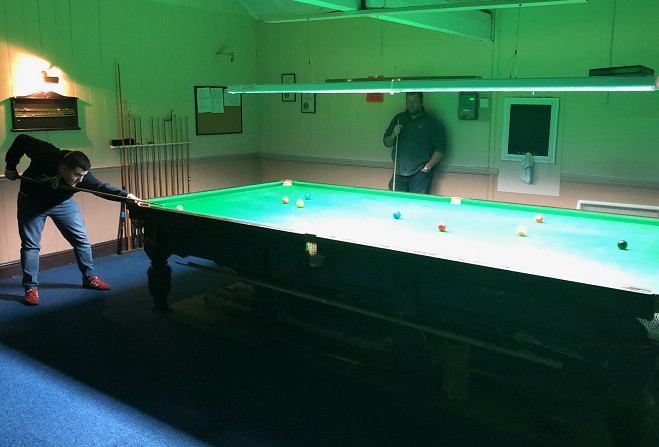 Gardner finds some form with break of 40

Finch Hill 'Mob' gained more ground after they won the top-of-the-table clash between the two sides 3-2, taking them within a point.

Steve Finnegan got them off to a good start, beating Tony Pring by three points, with Tom Miller and Peter Kirkham hitting breaks of 29 and 26 as they won their frames.

Alec Oates and Paul Bridson won for the Ballasalla outfit to preserve their position at the top.

In the south, Finch Hill 'Young Guns' won 4-1 away at Port St Mary Legion, with Darryl Hill amassing 119 points in the opening frame against Dave Pickersgill with breaks of 30, 27 and 20.

Shaun Roberts brought the scores level again for the home side, with a break of 24, before wins for Dollin Mercer, Calum Gardner and Brendan Clague sealed a good win for the 'Young Guns' - Gardner starring with a stylish break of 40 against Mike Boyle.

There was a whitewash in Douglas, as Malew 1 ran out 5-0 winners away at Douglas Snooker Club 'Newbys'.

Martin Costain, who plays off a handicap of 49, had a 39 break in the opening frame against Jamie Wilson, whose break of 20 wasn't enough to close the handicap deficit.

And that would set the tone for the fixture, with convincing wins for Tony Cubbon, Eric Drinkwater, Nick Crouchman and Roy Gelling in a comprehensively one-sided affair.

Individual performance of the week must again go to John Kennish, though, who hit breaks of 43 and 42 this time out as he took his personal tally to eight wins from nine matches for the Finch Hill 'Musicians', who sit third in the table.

It wasn't enough to inspire a victory for his team this week, however, whose only other winner was Lee Hunt as the duo restored some dignity in the final two frames against Douglas Snooker Club 'Hurricanes'.

Their opponents had already gone 3-0 up, with wins for Gary Conwell, Paul Smith and Nigel Kermode, who had a break of 22 and now sits as joint-top individual in the league on ten wins from 13 matches.

Bottom side Douglas Snooker Club 'Wannabes' secured their second win in two weeks, as they defeated a Peel Legion side who are struggling to recapture their early-season form.

James Kerr of St Olaves remains joint-top of the league individuals table after another win, this time away against Finch Hill 'Rockets' - he beat Paddy Delaney in the decider.

Marek Kenny and Graham Ashton had won for the hosts, with Dan Crawley and Paul Smyth winning the other two for the Ramsey outfit who now sit joint-fourth in the standings with Peel Legion and Finch Hill 'Young Guns'.

The individual standings can be seen below: 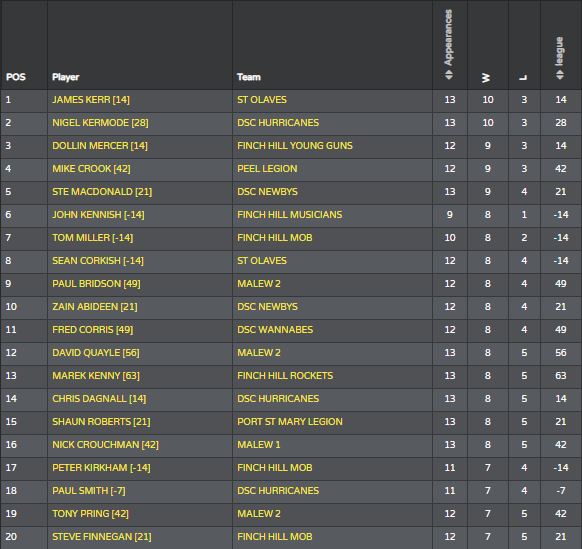 John Kennish now leads the break league on 22.5 points, despite only having played nine matches, with Tom Miller and Sean Corkish making up the top three on 22 and 20.5, followed by Peter Kirkham and Jamie Wilson on 19.5 and 16.5.