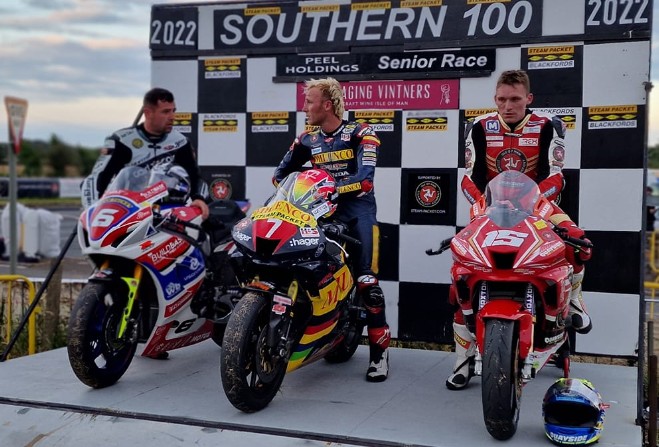 Davey Todd put in a commanding display on his Southern 100 return to take victory in the first race of 2022.

The Saltburn man aboard his Milenco by Padgett's Motorcycles machine took top spot in the seven-lap contest followed by Michael Dunlop in second and a memorable night for Manxman Nathan Harrison who took third.

Todd was involved for much of the race in a thrilling contest with 2019 champion Dean Harrison as both pulled away from the rest of the field.

However, Harrison was forced to retire with a couple of laps remaining as Todd opened up a significant gap to Dunlop in second.

Todd told Manx Radio after the race he was delighted to get the win:

Dunlop on his Buildbase Suzuki in turn began to pull away from those behind and, along with Dean Harrison's retirement, gave himself a comfortable cushion come the chequered flag to take second spot.

After that, it was a constant three-way battle for the final podium place with Nathan Harrison, Jamie Coward and Michael Sweeney all in the mix for the honours.

However, Nathan Harrison and his Quayside Racing Honda was able to fend off the advances Coward and Sweeney to cross the finish line in third.

Onchan rider, Harrison, says he felt privileged to be on the podium:

The Southern 100 Road Races continue this evening (13 July), with roads around the Billown Course due to close at 6.05pm tonight.