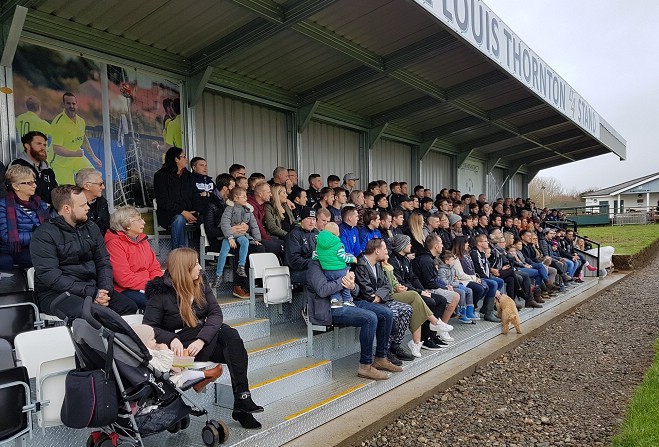 The Louis Thornton Stand was officially unveiled on Saturday

Four goals from Sean Doyle led the rout. There were two from Stephen Whitley and one apiece from Daniel Gerrard, Luke Murray and Dan Simpson – direct from a corner – in the rout at Ballafletcher.

Peel went even better as they put 11 past Douglas Royal without reply.

St George’s saw off the spirited challenge of Laxey at Glencrutchery Road.

Talented teenager Joe Walters cancelled out Furo Davies’ opener to ensure the Miners went in level at the break.

However, the champions restored their advantage on the hour through Ciaran McNulty before skipper Frank Jones and Jack McVey wrapped up the points in a 4-1 success.

Colby earned what could be a vital three points with a 3-1 home win over Braddan.

Jordan Primrose-Smith fired the hosts in front early on but Conor Dempsey levelled from the penalty spot after the break.

It was all square going into the closing stages but player-manager Chris McKenna kept his cool when Colby were awarded a spot-kick of their own and Ste Collister secured the points with a counter-attack goal in injury time.

Anthony Moore and Jamie Crook were the goal-getters as St John’s continued their fine progress under Rick Holden.