Toseland honoured to be nominated 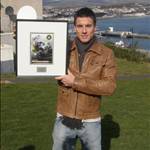 The early supper in the Royal Hall has been sold out for ages but there are still tickets available for the seats in the balcony.

They are only £3 and you get them from the Villa Marina Box Office.

MotoGP star and Ramsey resident James Toseland will be there and is delighted to have been nominated for the IOM Ambassador award:-